Pluck and luck got India home in Third ODI

The third ODI between India and Sri Lanka produced some highly entertaining cricket from both sides, and it was the visitors’ batting prowess that saw them through in the end.

The third ODI between India and Sri Lanka produced some highly entertaining cricket from both sides, and it was the visitors’ batting prowess that saw them through in the end. Although Gautam Gambhir set up the chase perfectly for India with a ton that reiterated how crucial his contribution is in chases, it was left-handed Suresh Raina’s half-century that was the critical innings, which took them home in a tight finish. While India batted with maturity in their chase, they were guided by a number of strokes of luck, especially during the match-winning Raina-Irfan Pathan stand. At least four edges went past the wicket-keeper in a space of two overs. Had even one led to the downfall of an Indian wicket, things might not have been so easy for India. 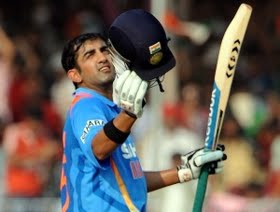 What India did very during the chase was build partnerships whilst maintaining a steady run-rate. Following Virender Sehwag’s early dismissal, India were on the back foot. However, just like the presence of Rahul Dravid and VVS Laxman meant that Sachin Tendulkar’s dismissal was not the end of the game, so too Gambhir and Virat Kohli have made sure that Sehwag’s early loss doesn’t dampen the team’s spirits. On a number of occasions in the last two seasons, the Delhi duo has played pivotal roles in helping India chase tough targets.

In Saturday’s contest, Kohli could not carry on to play a long innings. However, his alliance with Gambhir took India past hundred, which meant they were in with a chance provided the middle order fired. Kohli’s knock as well as his partnership with Gambhir was similar to the one in the 2011 World Cup final. As if to continue the sameness, M S Dhoni walked in ahead ofRohit Sharma and Suresh Raina. For a brief while during the partnership one wondered if Dhoni could pull it off for India again. However, an excellent spell from Lasith Malinga, during which he sent back a set Dhoni and next man Rohit Sharma off successive deliveries, with brilliant yorkers, got Sri Lanka right back into the game. A lot now depended on Gambhir, who had crossed his century. India though were still way behind the target, and when Gambhir ran himself out soon after, Lanka were right on top.

Another slice of luck came India’s way when Mahela Jayawardene took a rampaging Malinga out of the attack. The rest of the bowlers could not match his efforts, and Raina and Pathan slowly began rebuilding the innings. Once set, both left-handers got into their groove. By the time Malinga returned, Raina was confident enough to launch him over the long on boundary for a maximum -- a clear indication that the momentum had shifted India’s way.

It wasn’t all smooth sailing for India earlier in the day as well. After clinching three early wickets, they were milked out by Sangakkara-Jayawardene, and the bowling was blasted in the last 10 overs. A 2-1 lead gives them a cushion of work on these weaknesses.