Legendary West Indies batsman Shivnarine Chanderpaul retired from international cricket just the way he played it, without any fuss or fanfare. This, even after possessing numbers that would make most batsmen jealous

Legendary West Indies batsman Shivnarine Chanderpaul retired from international cricket just the way he played it, without any fuss or fanfare. This, even after possessing numbers that would make most batsmen jealous. 11867 runs in 164 Tests averaging 51.37 with 30 hundreds. In ODIs, he played 268 matches, scoring 8778 runs averaging 41.60 with 11 hundreds. In addition, he also featured in 22 T20s. With the 41-year-old hanging up his boots, we look back at some of his best efforts in international cricket, most of which understandably came in the longer format of the game. 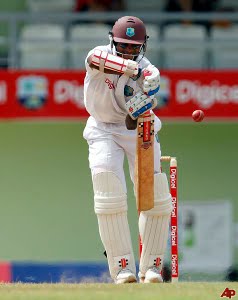 203 not out: Chanderpaul’s marathon innings came against South Africa at Georgetown in March 2005. Coming in at his customary number five position, Chanderpaul occupied the crease for 540 minutes, during which he faced 370 balls, and hit boundaries from 23 of those. In a high scoring match, West Indies batted first, and piled up 543 for 5 declared, Wavell Hinds also coming up with a double hundred. But, it was Chanderpaul’s knock at put West Indies firmly in control. South Africa had to fight hard from there to save the match.

Goodbye to Shivnarine Chanderpaul. Scored runs everywhere. Excellent career. Can be proud whenever he looks back

153 not out: Another unbeaten hundred, this time against Pakistan at Bridgetown. More importantly, this knock resulted in a West Indian victory. Chanderpaul’s knock came in West Indies’ second innings as they were looking to set a big target for Pakistan. His unbeaten innings lasted 358 minutes and 254 balls during which he hit 10 fours and a six. This was to go with the 92 he made in the first innings, with Brian Lara having already registered a hundred. West Indies went on to win the Test by 276 runs.

140: India was Chanderpaul’s favourite opponent, and he went on to register a crucial 140 against them at Eden Gardens, Kolkata in November 2002. Chanderpaul faced 258 balls for his knock, hitting 17 fours and a six before perishing to Virender Sehwag. This was an innings which also saw Wavell Hinds and Marlon Samuels hitting hundreds. In India’s second innings, Sachin Tendulkar and VVS Laxman got big hundreds, making it a memorable Test for batsmen.

136 not out and 70: Although West Indies lost this Test at Chester-le-Street against England in June 2007, it typified the never-say-die spirit of Chanderpaul. Even as his side crumbled, the left-hander stood tall amid the ruins. In West Indies’ first innings, he remained unbeaten on 136, out of a total score of 287, hitting 18 fours and a six. In the second innings, he chipped in with 70 from 163 balls, even as the entire team was bowled out for 222.

150: Chanderpaul’s ODI contribution was immense as well. He smashed against South Africa at East London on January 24, 1999. Batting first, West Indies put up 292. Chanderpaul’s knock came off 136 balls and featured 20 hits to the fence. For once, he overshadowed Carl Hooper, who made 108. West Indies went on to win the match by 43 runs, with Chanderpaul proving himself to be a match-winner in ODIs too.