Zimbabwe beat UAE by four wickets for their first win in the cricket World Cup 2015.

Shaiman Anwar struck a whirlwind half century as UAE posted their highest one-day total by reaching 285 for seven. 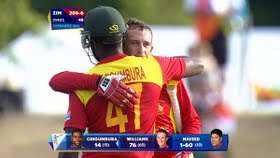 Pakistan-born Anwar hammered a career-best 67 off 50 balls after Krishna Chandran (34), Khurram Khan (45) and Swapnil Patil (32) laid the foundation for a competitive total. Medium pacer Tendai Chatara (3/42) was the stand out bowler for Zimbabwe.

MO Odumbe of Kenya got hit wicket twice in his career and both in the World Cup. Once in 1996 and once in 2003.

Elton Chigumbura: Disappointed about the fielding, but our guys played well with the bat. I thought when Craig Ervine went into bat he was positive and brought the run-rate down and it made the job of the guy coming in easier. That's where we went wrong against South Africa.

Mohammad Tauqir: We played some good cricket but we were expecting a different result. I think this wicket, we saw the last game also, even 300 was not enough. We know our limitations. They batted well, had some good partnerships. Both the left-handers played well, and they won the game. I think overall the bowlers bowled well.

Williams is the man of the match says I tried not to feel the pressure. We lost wickets at the wrong stages, but the wicket was very good just to keep knocking the ball down the ground.