South African leg-spinner Imran Tahir was on Monday allegedly humiliated and expelled by Pakistan Consulate in Birmingham. He had gone there to get visa to play for World XI in Pakistan.

Tahir will feature in a 14-member World XI team which will play three T20Is at the Gaddafi Stadium in Lahore on September 12, 13 and 15 against Pakistan. The event will be played as part of the Independence Cup.

Taking to Twitter to describe the incident, Tahir wrotez "Me with my family were humiliated & expelled from Pak High Commission earlier today when I went to get visa to play for WorldXI in Pakistan." 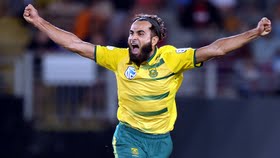 He also posted a message describing the entire event in detail. “"I have undergone a very unfortunate situation in the Pakistani Consulate Birmingham today. I had visited Consulate to secure our Pakistani visas with my family members. After going through the painful trauma of waiting for long 5 hours I was expelled by the staff explaining that the office hours are over and they are closing the Consulate. It was only after the intervention of High Commissioner Ibn e Abbas who instructed the staff that we were issued visas. It's an irony that being Pakistani origin South African Cricketer and intended to play in World XI was treated so miserably. Hats off to High Commissioner Ibn e Abbas who rescued me," wrote Tahir.

Tahir has played 20 Tests and 78 ODIs claiming 57 and 132 wickets respectively.