Mahela Jayawardene: Gayle is any other player

Mahela Jayawardene believes that Sri Lanka has the capacity to defeat West Indies in the Final of the ICC World T20. Mahela says that his team is not thinking about the 2009 Final of the World T20 which they lost against Pakistan.

Mahela Jayawardene believes that Sri Lanka has the capacity to defeat West Indies in the Final of the ICC World T20. Mahela says that his team is not thinking about the 2009 Final of the World T20 which they lost against Pakistan. Sri Lanka so far has gone onto win six matches in a row and is yet to be defeated.

The Sri Lankan Captain says that the preparations for the Final have been pretty good. Mahela on Gayle says that he is like any other player in a good West Indies team. The Lankan Skipper says that his team has never gone after individuals but has been focusing on the entire opposition. 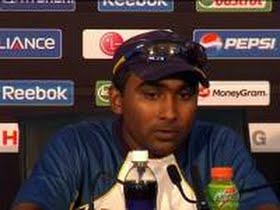 On the Semi Final against Pakistan, Mahela commented that the top order batted well and it was some tight Pakistani bowling in the middle overs which curtailed them. However, Sri Lanka believed that they could defend the total because of their quality bowling attack.

The pitch for the Semi Final between Sri Lanka and Pakistan has been heavily criticized as batting was a difficult job. Mahela Jayawardene commented on this saying that the way the pitches behaved wasn’t in their control and it would be a mistake to think that Sri Lanka had prepared them to heavily suit their bowling attack. Adding to that, Mahela said Pakistan had three top class spinners themselves, so it wasn’t any advantage for Sri Lanka to play on the slow dry pitch. Mahela went onto say his spinners are too good that they do not require such kind of assistance from the track.

It will be interesting to see how the pitch is going to behave in the Final at the R Premadasa Stadium. In the first Semi Final, batting was just too tough in the sluggish conditions and it ended up as a low-scoring affair. However, in the second Semi Final, West Indies piled up a huge total of 205. It’s another matter that the Australians folded to 131 all out.

Here is what Mahela Jayawardene has to say in the Pre Match Conference in Colombo: