Australia came to India in 2008 with a strong bowling outfit but a weak bowling attack. Unfortunately for skipper Ricky Ponting, his batters did as poorly as the bowlers, as a result of which India got home to a comfortable 2-0 win.

Australia came to India in 2008 with a strong bowling outfit but a weak bowling attack. Unfortunately for skipper Ricky Ponting, his batters did as poorly as the bowlers, as a result of which India got home to a comfortable 2-0 win. To be fair to the Aussies, India had better resources overall, and conditions also suited them to the hilt. It was a rare one-sided contest between the competitive teams, but one that was expected since Australia were in a rebuilding phase.

Australia began the series on a positive note, notching up 430 in their first innings, with centuries from Ricky Ponting and Mike Hussey. In reply, India were in big trouble at 195 for 6. The inexperienced Aussie attack however allowed India to get out of jail. Zaheer Khan and Harbhajan Singh came up with staunch half-centuries as India recovered to 360 all out. Trying desperately to make a match out of it, Australia declared their second innings at 228 to set India a challenging target of 299. India played it safe, and the game finished in a tame draw in the end. 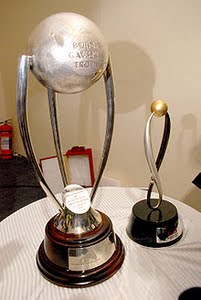 2nd Test at Mohali: Dhoni leads from the front

Having escaped at Bangalore, India were much more confident at Mohali. Batting first, they managed an impressive 469. Sourav Ganguly brought up a century in his farewell series, with Tendulkar contributed 88. Skipper M S Dhoni blasted a quick-fire 92 to terrorise Australia. Leggie Amit Mishra, making his debut, surprised the Aussies. His five-for enabled India to restrict the visitors to 268. India then raced to 314 for 3 courtesy Gambhir’s fiery century and half-centuries from Sehwag and Dhoni, who promoted himself to number three. Chasing a massive 516, Australia folded up for 195, Mishra and Zaheer getting three each.

3rd Test at Delhi: Kumble calls it a day

Consistent injury woes forced the Indian great to announce his retirement during the course of the series. India could not win the game for him, but they were the dominant side without doubt. India batted first and raked up 613 for 7, Gambhir and Laxman toying with the Aussie bowling en route to their double centuries. Australia did equally well in response, Clarke making 112 and many others chipping in with substantial scores as they made 577. Expectedly, the match meandered towards a draw from that point.

It was at Nagpur that Ganguly lost a few admirers when he apparently chickened out of the Test against Australia in 2004. It was at the same venue that he played his last Test and, this time, there were only fond memories. He contributed 85 in India’s first innings and, along with Tendulkar’s ton, India managed 441. Australia were solid in reply courtesy Simon Katich’s hundred. Ganguly made a first-ball duck in his last innings but thanks to Sehwag’s 92 and half-centuries from Dhoni and Harbhajan, India set Australia 382 to win. The visitors collapsed to 209, Harbhajan and Mishra combining to pick up seven wickets.