Team India batter Rohit Sharma praised fellow opener KL Rahul for his splendid hundred on Day 1 of the Lord’s Test against England. Rahul remained unbeaten on 127 from 248 balls as India went to stumps at 276 for 3. Rahul and Rohit (83) featured in a brilliant opening stand of 126 after India lost the toss and were asked to bat first under overcast conditions. The two openers ensured that India did not lose early wickets even as England came hard at them.

Speaking at a post-match conference, Rohit hailed Rahul for his stupendous knock. He said, "Yeah, it was probably the best I have seen KL bat. I thought he was very much in control from ball 1 till we finished the day. At no given point did it look like he was confused or thinking too much. He was very clear with his plans and when you do that and trust your plans, they definitely work. Today was his day and he really made it count.” 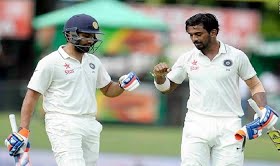 Rahul batted right through the day, during which he hit 12 fours and a six. On the other hand, Rohit was dismissed for 83, cleaned up by a beauty from James Anderson. Rohit smashed 11 fours and a six before walking back. Speaking about his opening partnership with Rahul, the Mumbai Indians captain said, "Honestly, there was no discussion because KL wasn't supposed to play the first game, Mayank was. Unfortunately he was hit on the head and was out due to a concussion and then KL stepped in. Only after we went out to bat did we start discussing what we needed to do and things like that.”

“Yes, it's the first time I have opened with KL in Test cricket but I have batted with him a number of times. We know and understand each others' games and it's important to keep talking in the middle. It can be a lot lonely out there if you are not communicating. It's always nice to have a partner who's willing to communicate and take the game forward. Our mindsets are pretty similar," he added.

Ajinkya Rahane (1 not out from 22) was giving Rahul company at stumps. Earlier, Cheteshwar Pujara (9) was against dismissed cheaply while Virat Kohli (42) gave his wicket away after getting a start.