When the clash between Royal Challengers Bangalore and Delhi Daredevils devils began at Bangalore, it was a given that Delhi would need something spectacular to overcome the strong RCB.

When the clash between Royal Challengers Bangalore and Delhi Daredevils devils began at Bangalore, it was a given that Delhi would need something spectacular to overcome the strong RCB. The theory grew even stronger after Bangalore amassed 191 batting first, with Virat Kohli, AB de Villiers and Shane Watson again coming to the party with blazing knocks. Thankfully for Delhi, they found that someone special in the man actually expected to shoulder the burden of Delhi's batting -- Quinton de Kock. The South African opener has been in good form for Delhi, and continued his good work against Bangalore with another smashing performance.

What de Kock's knock did was, it took the pressure completely off Delhi. When the run chase began, they would have been worried for sure, but de Kock found the boundaries with ease and, in the end, guided the team to a memorable win, stunning Bangalore. De Kock blazed away 15 fours and 3 sixes in a knock that came at a strike rate of over 211. The numbers tell a clear story of de Kock's dominance over the RCB attack. What de Kock did exceptionally well during what was one of the most memorable tons in the IPL was to take the team on the threshold of victory. Delhi only needed eight when he was out.

While de Kock's knock stood out, the performance of Karun Nair was also significant under the circumstances. He aided de Kock in the run-scoring, easing the pressure off the South African opener. It was a crucial innings in the sense that Delhi had lost a couple of early wickets and were under pressure, when the duo joined hands. Shreyas Iyer and Sanju Samson both departed early in the chase, and another wicket would have clearly put RCB in the driver's seat. But, Nair and de Kock displayed good strokeplay, and in tandem, put RCB on the back foot, in the end, easing to an impressive win. 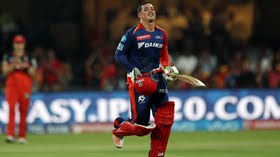 For RCB, the defeat was a good wake up call. While their batsmen remain in pristine form, their bowling will definitely be seen as a cause of worry. Not being able to defend 192 is certainly a setback for Bangalore. David Wiese and Harshal Patel went for plenty, and never looked like taking wickets. For a change, Yuzvendra Chahal also had a bad day, while Sreenath Aravind also struggled to control the flow of runs. Shane Watson was the only one to maintain some kind of control over the opposition batsmen, but Bangalore clearly missed someone like Samuel Badree. And while de Villiers and Kohli continue to rock, RCB will be desperate for Chris Gayle to come to the party.