Team India took control of the Antigua Test on Day 2, having hosts West Indies on the mat at 189 for 8 after posting a challenging 297 batting first

Team India took control of the Antigua Test on Day 2, having hosts West Indies on the mat at 189 for 8 after posting a challenging 297 batting first. Ishant Sharma was the star of the day for India picking up his ninth five-wicket haul in Tests.West Indies lost five wickets in the final session as a number of batsmen threw their wickets away after getting their eye in. Roston Chase (48), John Campbell (23), Darren Bravo (18), Shai Hope (24) and Shimron Hetmyer (35) who were all guilty of gifting their wickets away after getting starts.West Indies' approach was much in constrast to India, who resumed on 203 for six and went on to post 297 thanks to a fighting partnership of 60 between Ravindra Jadeja, who contributed a crucial 58 and Ishant (19 from 62). 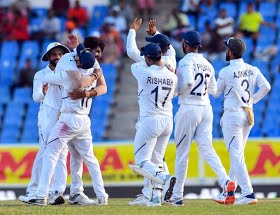 Carrying on with his good work, Ishant then troubled the batsmen with probing spells, the cross seam deliveries proving highly effective. He also displayed great catching skills with two crucial caught and bowled.

Ishant and his bowling partner Mohammad Shami combined to send back openers Kraigg Brathwaite and Campbell respectively. Jadeja later dismissed debutant Shamarh Brooks for 11 to leave West Indies in big trouble at 50 for 3. The middle and lower order then just kept fumbling after raising hopes.


If India managed to end the day with a 108-run lead, it had a lot to do with the handy partnership between Jadeja and Ishant. After Kemar Roach dismissed Rishabh Pant early on the second day, going round the wicket and inducing an edge, it seemed the innings might fold up early.


However, Ishant stood up admirably to the challenge of Roach and Shannon Gabriel, who finished with seven wickets between themselves while Jadeja rose further in stature with another rescue act. Jadeja hit six fours and a six in his innings, becoming the last man to be dismissed as he looked for quick runs towards the end.


Jadeja brought up his 11th fifty by slamming one to cover for a boundary, then swept Roston Chase for a six, taking India closer to 300. After that, it was time for Ishant act part two.