Two teams with contrasting starts to the World Cup will face off in match number six of the tournament. England

Two teams with contrasting starts to the World Cup will face off in match number six of the tournament. England was absolutely brilliant, on expected lines, in the match against South Africa while Pakistan was brutally crushed by West Indies.

It was at Trent Bridge that England registered the highest ODI total, not once but twice. And England will be looking to inflict further wounds on the already injured Pakistan. They will go into the match high on confidence. Apart from Jonny Bairstow, everyone from Jason Roy to Joe Root and Eoin Morgan were among the runs in the opening game.

England would be most pleased with the performance of their two match-winners Ben Stokes and Jofra Archer. While Stokes was brilliant in all departments, including in the field, Archer proved why there were many calls to fast-track him into the England squad. And, now is the time for him to prove his worth. He has begun well. 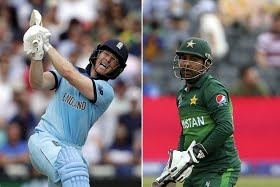 Pakistan has to do really well to raise their game after the demoralizing start against West Indies. Their batting just could not stand up to the challenge on a tricky surface. After the shell-shocking loss, Shoaib Akhtar went to the extent of calling Pakistan skipper Sarfraz Ahmed fat and unfit. Their batsmen will have to show drastic improvement against a solid England attack.

There are reports that England may unleash Mark Wood against Pakistan considering how they fared against West Indies. Jofra Archer will possibly be the bigger challenge for Pakistan's batsmen. They do have the experienced men to do the trick but the confidence seems to be lacking. The only plus point for Pakistan from the game was Mohammad Amir's return to form. He should look to maximize some regained confidence.