Indian captain Virat Kohli and former South African batsman AB de Villiers have been the cornerstone of Royal Challengers Bangalore (RCB) in the Indian Premier League (IPL) over the last few years. As a result, the duo has built up a good rapport as teammates as well. In an Instagram chat on Friday, they discussed various things -- from the ongoing Coronavirus pandemic to their experience of playing for RCB.

Back in 2016, Kohli and ABD added a mammoth 229 runs in a match against Gujarat Lions. Kohli and de Villiers revealed that they have put up the bats, jerseys and gloves from that match for auction. The money raised from the same will be used to fight the coronavirus in India and South Africa. 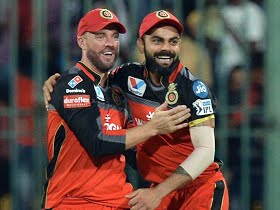 "In the 2016 IPL match against Gujarat Lions, we both scored centuries, it was a good partnership, it was an enjoyable one, I got 120 odd and you got your hundred towards the end, it was the Green game, we did our bit for creating awareness about the environment," De Villiers said.

"The plan now is to get our kits to go for an online auction, the green kits would go for auction, people can go and bid and all the proceeds will go the COVID-19 fund and it is a cause which will provide food to the maximum number of people," De Villiers further revealed.

Kohli, on the other hand, thanked fans for keeping the faith in RCB despite the numerous disappointments. He also vowed never to play for any other IPL team. "No matter what happens, I'm never leaving RCB," Virat Kohli told AB de Villiers. Kohli is the only player in IPL history who has played for the same franchise since the start of the tournament while de Villiers joined RCB in 2011.

Dhoni was chosen as the captain and Gary Kirsten the head coach. Kirsten was the coach when India won the World Cup in 2011.