India's batsmen have failed to cross 300 in a single innings during the series against Australia so far. But,

India's batsmen have failed to cross 300 in a single innings during the series against Australia so far. But, Cheteshwar Pujara feels that there isn't much wrong with Indian batsmen.

India were all out for 189 in the first innings on Saturday, as Nathan Lyon claimed eight wickets. Speaking to the media at the end of the second day's play, Pujara explained, "Most important thing was we did not have a big partnership. We kept losing wickets. There is nothing wrong with the Indian batting line-up. We are known to play better against spinners, apart from last three innings. We will have a better gameplan in the second innings. We are confident that we will do well."

Pujara also praised the bowlers for their effort on Sunday. "It was not easy for the fast bowlers as odd ball was staying low. They have put in a lot of hard work. Spinners did very well. You can see the run-rate, they were not able to score many runs. In a way it was victory for us. We bowled tight lines, even the lengths were very good. We bowled well and got six wickets but they did not score many runs," Pujara was quoted as saying in a PTI report. 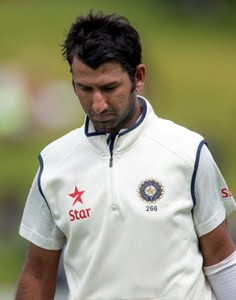 On the long Indian season, Pujara went on to add, "We enjoyed this particular season. Winning matches apart from losing a game. This team is strong and I definitely feel will come back in this particular Test match. We are still enjoying this game. The kind of success we had in the last year, and part of this year, we want to produce more good results and forget the last Test match. I am confident that we will come back in this Test match."

On India's plans for Monday, Pujara stated that India were looking to bowl Australia out for under 300. "If we can get them out in another 30-40 odds runs, but you never know. We focus on bowling right line and length and wickets will come for spinners and fast bowlers if we continue the way we have bowled. We will have some different plan tomorrow. We will obviously think about what we could have done better. Our bowlers have bowled every well. We would try to restrict them in another 30-40 runs," he said.