Former Pakistan captain Wasim Akram has criticised the Board of Control for Cricket in India (BCCI) because he thinks that the Indian cricket team is playing too much cricket at the moment and their hectic schedule is the reason behind the players being injured.

Former Pakistan captain Wasim Akram has criticised the Board of Control for Cricket in India (BCCI) because he thinks that the Indian cricket team is playing too much cricket at the moment and their hectic schedule is the reason behind the players being injured.

A number of senior players from the Indian team requested BCCI to rest them for the limited-over’s series against West Indies next month. 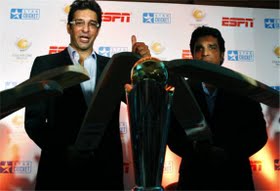 As a result, Mahendra Singh Dhoni, Sachin Tendulkar and Zaheer Khan were given a break while Virender Sehwag has been ruled out of the Caribbean tour because of a shoulder injury.

BCCI announced a young team for the initial portion of the West Indian tour and Gautam Gambhir was named as the captain of the side.
However, the left hander also aggregated his shoulder injury in his last league match of the Indian Premier League (IPL).
The legendary Pakistani fast bowler said that a number of Indian players are facing injuries just because they are playing too much cricket.

He feels that the international schedule is too hefty these days and the Indian players play the complete season of IPL as well, which is a little too much to bear as a professional cricketer.

He said, “As we come to the end of another gruelling IPL, I am not surprised that many players are nursing injuries. The hullabaloo about Gautam Gambhir’s fitness is a case in point as injuries threaten a player’s career and ultimately affect the country’s fortunes in ICC-sanctioned series”.

There is plenty of important cricket waiting for India in the coming season as they have to visit West Indies, England and Australia this year.

Akram feels that the English tour is going to be very tough for the Indian team and BCCI should make sure that they have all the top players available, otherwise it will be very difficult for India to dismantle the strong England side.

“It would be sad if India missed their top players in the series against England. That will be a cracker of a series and India must have their best squad at its disposal. I only hope there are no more injuries in the Caribbean because India’s bowling attack is already looking quite thin”, said Akram.