A great all-round performance is not what you expect from a Pakistan cricket team. But, following their comprehensive win in the opening Test against South Africa at Abu Dhabi, it would be difficult to describe their triumph in any other apt words.

A great all-round performance is not what you expect from a Pakistan cricket team. But, following their comprehensive win in the opening Test against South Africa at Abu Dhabi, it would be difficult to describe their triumph in any other apt words. Right from day one, when South Africa won the toss and chose to bat first, Pakistan were the dominant force in the game. The only time they looked under any sort of pressure in the match was when they lost three quick wickets in their second innings, but the match was done and dusted by then. 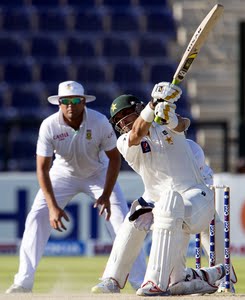 Looking back at the game, it was the opening day performance of the teams which had a significant impact on the eventual result. South Africa’s batting collapsed against some measured bowling, and the total they got in spite of a fighting century from Hashim Amla was inadequate. The failure of the top and middle order cost the Proteas in a big way. Graeme Smith, Alviro Petersen, Jacques Kallis and AB de Villiers, all fell without contributing much, putting South Africa in deep trouble. JP Duminy batted well for his half-century, but he should have converted his knock into a big score. Also, the lack of runs from the lower order undid most of Amla’s hardwork.

South Africa would still have been hopeful since Pakistan are so used to batting collapses. But this performance from them was thoroughly professional, a significant deviation from their usual self. Pakistan’s batsmen did what their South African counterparts did not, compile big scores. Opener Khurram Manzoor’s valiant century ensured Pakistan were ahead of the South Africans in the first innings. Also, unlike Amla, Manzoor got great support. Debutant Shan Masood, the other opener in the match, came up with a sprightly half-century, to block Steyn and co from getting the early breakthrough.

When the openers set a great platform for the team, the task automatically becomes easier for the middle-order. The decision to drop the non-performing opener Mohammad Hafeez and blood in a youngster definitely worked in Pakistan’s favour. Skipper Misbah-Ul-Haq is so used to batting under pressure that he must have become immune to the same. Hence, his ton in this match would have been like a walk in the park for him. Asad Shafiq’s half-century only added to South Africa’s woes. From the African point of view, Dale Steyn and Vernon Philander were effective, but what the Proteas needed was a complete bowling performance, which wasn’t the case.

The only way South Africa could have held the Pakistanis to a draw in the game was by batting out of their skins in the second innings, but they didn’t display the prowess for the cause. Except de Villiers and Robin Peterson towards the end none of the batsmen managed to hang around for a substantial amount of time. Pakistan’s bowling in both the innings stood out. They used only four bowlers, but all of them had impressive figures to display. In a nutshell, this was a rare Test where Pakistan completely outplayed South Africa.