With veteran Sri Lankan opener Tillakaratne Dilshan having deciding to hang up his boots from Test cricket, we look back at his five best knocks in the five-day game.

With veteran Sri Lankan opener Tillakaratne Dilshan having deciding to hang up his boots from Test cricket, we look back at his five best knocks in the five-day game. 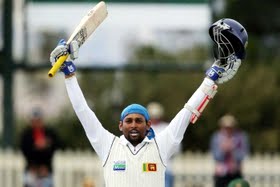 193 vs England at Lord’s in June 2011: This was Dilshan’s top score in the Test format. Sri Lanka were under pressure in this match since, batting first, England had notched up a massive score of 486. However, Dilshan replied with an exceptional knock. He batted out for 253 balls and 433 minutes for his innings which featured 20 fours and two sixes. Adding to his glory was the fact that he was the captain in the drawn game. Not surprisingly, Dilshan was the man of the match in the Test. Matthew Prior and Alastair Cook were the other centurions in the high-scoring match.

92 and 123 vs New Zealand at Galle in August 2009: Another Test dominated by Dilshan. Batting first Lanka amassed 452 with Dilshan blasting 92 from 72 balls with the help of 12 fours and one six. This innings actually set the tone for the Test. The innings also saw Jayawardene and Samaraweera compiling centuries. After New Zealand were bowled out for 299 in their first innings, Dilshan came up with his second big knock of the game. He made an unbeaten 123 from 131 balls, an innings which featured 12 fours and one six. Lanka declared their second innings at 259 for 4. Set 413 to win, New Zealand were cleaned up for 210.

147 vs Australia at Hobart in December 2012: This innings came in a losing cause, and was another demonstration of the lack of support for the Lankan opener. After Australia had put up 450 on the board batting first, Lanka needed a few batsmen from their end to stand up. Dilshan rose to the occasion. His 147 was a more subdued effort in comparison to his other tons. It was a clear indication of the tough conditions and the fact that the aggressive opener was willing to adapt. Dilshan took 273 balls for his knock, and hit an impressive array of 21 fours. Unfortunately, he did not find much support from the other batsmen, and Australia ended up winning the Test easily by 137 runs.

125 not out vs India at Colombo in July 2008: Sri Lanka had as many as four centurions in the only innings in the Test. The interesting aspect as far as Dilshan was concerned was the fact that he batted lower down the order in this game. Coming in at number six, with Lanka already in a great position, he slammed an unbeaten 125 from 170 balls with 12 fours and a six. India’s batting was a disaster in the Test, and Lanka got home by an innings and 239 runs.

145 vs Pakistan at Lahore in March 2009: This was the Test that was abandoned due to the terrorist attack on the Lankan team. Batting at number six again, Dilshan made an impressive century, his innings comprising 21 fours. Sadly, the Test which lasted two days will only be remembered for the wrong reasons. --By A Cricket Analyst