In spite of the fact that two of their key players, James Anderson and Ben Stokes, were ruled out of the opening Test at Lord's, against Pakistan, due to injury, England still went into the match having the upper hand.

In spite of the fact that two of their key players, James Anderson and Ben Stokes, were ruled out of the opening Test at Lord's, against Pakistan, due to injury, England still went into the match having the upper hand. The hosts were all over Sri Lanka in the previous Test series, and thus went into Lord's high on confidence. But, it did not take long for them to get a reality check. Pakistan, on paper, and on the field as well, are a much superior opponent. Of course, Pakistan went into the match under immense pressure, considering all that had transpired at this venue six years ago. But, England failed to maintain the tempo gained from the previous series, and came short in a tense clash.

Going into the Lord's game, Pakistan knew that if there is one area where they could really put the hosts under pressure, it would be if they exposed England's middle-order. And the hosts ended up faltering in that aspect, thus putting themselves on the backfoot. The failure of Nick Compton against Sri Lanka meant that Joe Root had to be pushed up from number four to number three in the batting order. And, with no Stokes, the middle order included James Vince and Gary Ballance, both looking to establish themselves in the Test side. The duo spent some time out in the middle, but it was not enough either for them individually or the team as a while.

A closer analysis of England's batting would however reveal that the batting outfit was a failure as a whole. Right from the top to the lower order batsmen, no one was prepared to slug it out. Skipper Alastair Cook got a hard-fought half-century in the first innings. And while it was a credible effort, he was lucky to have been reprieved more than once. One wonders what would have been the state of the game had Cook fallen early. As has been the case with England for a couple of years now, they were heavily dependent on their talisman Root. But, he had a disappointing game, losing his wickets to attacking strokes in both the innings. That hurt England badly.

Another batsman England were heavily depending on in the match was Jonny Bairstow. The wicket-keeper bat got two impressive hundreds in the series against Sri Lanka, and would have been seen among the major threats by Pakistan. But, while Bairstow was successful in hanging around, he too could not come up with a substantial score in the end. Another massive disappointment was the failure of Moeen Ali with the bat, more than the lack of runs the manner in which he gave his wicket away especially in the second innings, when the team needed him to play a big knock. With the experience he possesses, Ali should be cross with himself. 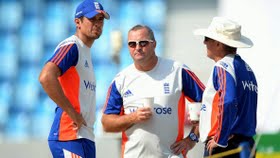 Although it is too early to panic, England must relook at the manner in which they played Yasir Shah. For a spinner to pick up 10 wickets in a Test at Lord's, a special effort is needed. But, it must be said that England aided the cause of Misbah-ul-Haq and co by playing some poor strokes, and thus playing into the opponent's hands. Perhaps, the only positive for England from the Lord's loss was the excellent show of Chris Woakes, who matched Yasir in terms of performance. But, unlike in the latter's case, he lacked support from the others, Steven Finn, in particular. England would be hoping for Anderson and Stokes to be fit for the next game and, along with it, a change in fortune as well.