Toss:West Indies won the toss and chose to bowl first 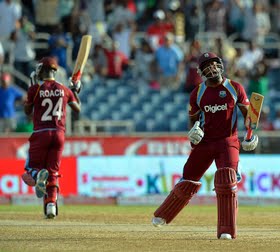 Johnson Charles is the Man of the Match: "That was a good innings, previous game I struggled a bit. Me and Bravo have always been batting good, I enjoy batting with him. Wicket improved a bit, it got flatter and was more of a batting pitch.

Kieron Pollard: "We find ways to get into these positions, but we won in the end. Teams of the past could have just fallen, that shows the belief of everyone in the team, victories such as these bring us together. We wanted to go to Trinidad with two wins, does not matter how we have done it, but we have. We should not be overconfident though, should win these sort of games easily. Thanks to the crowd for the support.

Virat Kohli: "The way the wicket played in the second innings, the score was not enough, but it was completely different in the morning, it was damp, it got good to bat on later. There were times when you are under pressure and you miss him (Dhoni) because he is calm under pressure. We tried to take as many wickets as possible, one or two edges going to the fielders would have been different, we were close to winning it. It was just a matter of one wicket. Great game by West Indies, great fight by us, great entertainment."