Waqar Younis says Afridi has been immature and destabilizing

Pakistan cricket coach Waqar Younis has slammed his World Cup captain Shahid Afridi's behavior during a recent tour of the West Indies as being immature and destabilizing.

Pakistan cricket coach Waqar Younis has slammed his World Cup captain Shahid Afridi's behavior during a recent tour of the West Indies as being immature and destabilizing.

In a tour report published in the Daily Dawn newspaper on Tuesday, Waqar said Afridi's "volatile and immature nature" was the reason behind Pakistan's two defeats in the five-match limited-overs international series in the Caribbean. 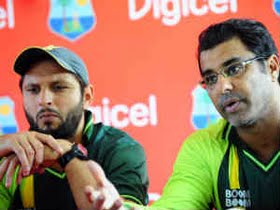 "As a captain I feel he (Afridi) is still very immature, has poor discipline, lacks game plan and is unwilling to listen to others' opinion or advice," Waqar was quoted as saying. "... sometimes his volatile and immature nature have proved detrimental and led to unfortunate outcomes including game losses."

Afridi criticized the team management on his arrival from the West Indies, saying everyone should do his job and should not interfere in what others were doing.

The PCB subsequently removed Afridi as captain, with cricket board chairman Ijaz Butt saying he had enough reasons to make Misbah-ul-Haq captain for a two-match series against Ireland.

Afridi quit international cricket in protest, criticizing the PCB officials, and said he would only resume his international career if the PCB was overhauled.

The PCB responded by suspending Afridi's central contract and revoking the No Objection Certificate that he needs to play for any team abroad.

Afridi's lawyers have challenged the formation of the PCB's disciplinary committee and said they would boycott Wednesday's hearing as they felt the cricket board had already announced the punishment without giving the allrounder a fair chance to defend himself.

Pakistan lost the last two one-day internationals after getting an unassailable 3-0 lead against West Indies.

Waqar said Afridi was unwilling to discuss the playing XI before the last two matches and came to team meetings with a "decisive mindset."

"I, as a part of the touring selection committee, tried to discuss different options for the team but he behaved very inappropriately and walked out of the meeting," Waqar wrote in the Daily Dawn.

Waqar said manager Intikhab Alam always tried to resolve issues with Afridi, "but his (Afridi) attitude and unwillingness to sort out matters led to a very uncomfortable dressing room environment which affected the players' performance."

Alam, in his report, said that the coach and captain did not get along well and Afridi did not consult the coach, "especially when to take batting powerplay or change the batting order."

"As a matter of fact Shahid Afridi is a highly hyperactive personality who lacks temperament," Alam said.

Alam said he tried to diffuse the matter when coach and captain had disagreement over the playing lineup for the fourth and fifth ODIs against West Indies.

"There was some serious disagreement on certain players, which resulted in heated arguments ... but after some discussion, Afridi got up and left the room."

Waqar was furious with Afridi when the captain promoted himself in the batting order in the fourth ODI without consulting him.

Alam had also advised Afridi not to speak to media on his return home and if he had any issues with the coach or anybody else, he should directly talk to the chairman.

Alam said that he had observed Waqar and felt "he at times (is a) little harsh and arrogant which creates problems."