South Africa on top after bowling out India for 341

South Africa finished the rain-hit second day’s play on a high at 82 for no loss in 20 overs having bowled out India for a modest 341.

South Africa finished the rain-hit second day’s play on a high at 82 for no loss in 20 overs having bowled out India for a modest 341. India’s new ball bowlers Zaheer Khan and Mohammed Shami gave a poor start as the South African openers Graeme Smith and Alviro Petersen got their team off to a flier.

The introduction of Ishant Sharma and later on Ravindra Jadeja managed to get things under control for the visitors. Jadeja looked dangerous getting the ball to turn sharply. He will hold the key for India’s success in the remainder of the Test match. 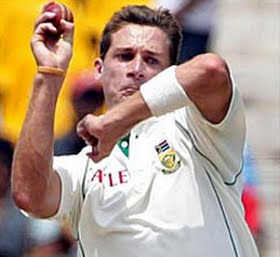 India Innings Update: India have been bowled out for 341 in their first innings, a little under 90 minutes after the Tea Break on Day 2. Dale Steyn, who was wicketless for 70 overs since Johannesburg turned the Indian innings on its head by taking 6 for 100 in 30 overs. India wouldn’t be that disappointed as they have got a decent total on a pitch that is taking some turn and it is abrasive enough to aid reverse swing.

Ajinkya Rahane boosted the Indian total with a maiden Test fifty. The Mumbaiker lost partners in a hurry at the other end which left him stranded on 51* (from 121 balls with 8 fours). India had a shocking session after Tea losing five wickets for 63 runs. Skipper MS Dhoni appeared to have got India on track with a 50-plus stand with Rahane before playing a loose drive off Steyn to give a simple catch to slips. Dhoni scored 24 from 40 balls with 3 fours. Ravindra Jadeja like Rohit Sharma was dismissed for a duck in a tame fashion. It was a soft dismissal for Jadeja as he edged his forward defence off a turning delivery from Duminy to Kallis, who collected his 200th Test catch.

India’s tail didn’t last for any time at all. Zaheer Khan was caught behind brilliantly by AB de Villiers in a flashy shot off Steyn. The same bowler went onto take his sixth wicket when Ishant nicked him behind on the backfoot. Last man Shami edged a short ball from Morkel to end the Indian innings in the 112th over.

Update at Tea on Day 2: An absorbing session of 34 overs saw Dale Steyn bowl the hosts into a strong position but only for it to be neutralized by a solid partnership between Virat Kohli and Ajinkya Rahane. However, at the stroke of Tea, India lost its advantage as Virat Kohli got caught down the legside trying to glance a short ball from Morne Morkel.

India got to Tea at 271 for 5 with Ajinkya Rahane (23* from 72 balls) joined by Skipper MS Dhoni (0*). It was a bad start for India on Day 2 as the well set overnight batsmen Cheteshwar Pujara and Murali Vijay fell in succession to Dale Steyn. Pujara got out caught behind for 70 (from 132 balls with 9 fours) in a booming drive off a juicy fast delivery from Steyn which cut away off a crack. In his next over, Steyn had Murali Vijay fending him off the glove to a short ball around the rib cage while AB de Villiers took a smart catch down the legside. Vijay missed out on his maiden overseas Test century by just three runs.

The very next ball after Vijay’s exit, India lost Rohit Sharma for a first ball duck as he went back to a length ball from Steyn and offered no shot to a Steyn inswinger which was heading towards off and middle. India from 198 for 1 slipped to 199 for 4 thanks to Steyn’s rampant spell with the reversing old ball.

Update at 4:06 PM IST: Good news, the match will finally start at 12:40 PM local (4:10 PM IST). Play has been extended by an hour but we know it will last till the light stays good. A minimum of 75 overs are to be bowled today in the two sessions. The morning session has been wiped off by rain.

Rain Update: The second day’s play at Kingsmead has been delayed by light rain. The match was supposed to have an early start by 30 minutes but that will be scratched. The second day will remain to be overcast and bad light could once again come into play.