Fans and cricketers witnessed shocking scenes as groundstaff at Guwahati resorted to using hairdryers and vacuum dryers apart from the usual Supper Soppers in an effort to try and get the ground ready for the first T20I between India and Sri Lanka after rain interrupted the start of play.

The match had to be eventually abandoned without a ball being bowled due to the prevalent damp conditions. Former India pacer Zaheer Khan has expressed disappointment over the kind of preparations made by the ground staff in their efforts to try and get the game underway. Despite the rain stopping, the pitch was wet as water apparently went in through the covers.

"When there is water on the wicket that really changes the dynamics of the game. Everyone was shocked because the rain stopped and in today's day and age this is the last thing on your mind that water has gone on the wicket through the covers. 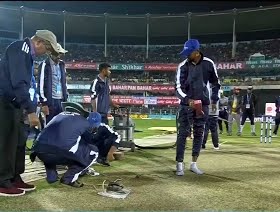 "Bit disappointing but we don't know the exact story. Maybe the pitch wasn't covered properly because to hear a cover not being taken properly is something which is unheard of," Zaheer told Cricbuzz as the match had to be called off.

Commentator Aakash Chopra backed Zaheer and stated that water seeping onto the pitch was a 'schoolboy error'.

The toss was held on Sunday at Guwahati as Virat Kohli called correctly and invited Sri Lanka to bat first. However, to the disappointment of fans, no further action was possible.

The second T20I will be held at Indore on Tuesday. The series marks the return to international cricket of pacer Jasprit Bumrah. Opener Shikhar Dhawan will also be under pressure to perform with KL Rahul shining in the role of the opener in his absence.

India will play an ODI series at home against Australia following the conclusion of the T20Is against Sri Lanka.