Karthik's blinder in vain as CSK beat Mumbai in a thriller

It was a dead rubber between Chennai Super Kings and Mumbai Indians as both the teams already knew that they were out of the CLT20.

It was a dead rubber between Chennai Super Kings and Mumbai Indians as both the teams already knew that they were out of the CLT20. However, the two IPL teams played a thrilling match at Johannesburg with Chennai Super Kings holding onto a narrow 6-run win. 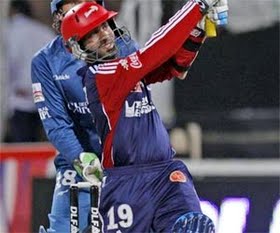 The run chase for Mumbai Indians got going thanks to a fine 3rd wicket stand of 64 between Rohit Sharma (32 from 26 balls with a four and 3 sixes) and Dinesh Karthik. CSK was on top despite that as Mumbai Indians needed as many as 74 runs from the final five overs. The match opened up big time in the 18th over with R Ashwin going for 24 runs! Dinesh Karthik was turning out to be hero but got out to a slower one from Hilfenhaus midway in the penultimate over. The Wicket Keeper batsman scored a brilliant 74 from 45 balls with 4 fours and half a dozen sixes.

Mumbai Indians were left with 19 to get from the final over to be bowled by Ravindra Jadeja. Kieron Pollard smoked him for a six in the first ball but in the next delivery got caught at long on after a 17-ball 31 (with a four and 3 sixes). Skipper Harbhajan Singh couldn’t take his side to victory as he played out six balls for just 6 runs. CSK managed to keep Mumbai Indians down to 167 for 7.

Ben Hilfenhaus was the hero for CSK with figures of 4-1-14-2. Bollinger and Albie Morkel also bowled well while R Ashwin had an off day going for 44 runs in 3 overs.

Toss and Teams: Mumbai Indians have won the toss and asked Chennai Super Kings to bat first under overcast conditions at Johannesburg. Both the teams have been eliminated following Lions’ victory in the earlier game at this same venue.