Selection of Ishant over Zaheer perplexing

The Indian team for the two Tests against West Indies at home has been announced. As always, there have been some expected selections and some surprises.

The Indian team for the two Tests against West Indies at home has been announced. As always, there have been some expected selections and some surprises. While a majority of the squad automatically chooses itself, the most amount of curiosity was around a name in the pace bowling department, whether or not Zaheer Khan would be recalled to the squad. In a rather disappointing move for most Indian fans, he was ignored as the selectors have decided to continue with the same bowling set up, which has been part of the squad in recent times. 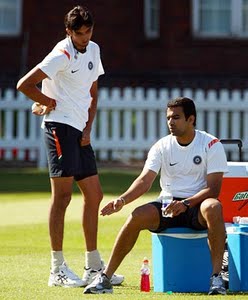 While it is understandable that the age factor may have gone against the veteran left-arm seamer, what perplexes most is the fact that Ishant Sharma continues to retain his spot even after having done next to nothing in recent times. After the manner in which Ishant has been trashed by the Aussie bowlers in the ongoing one-day series, the announcement of the lanky pace bowlers’ axing seemed like a mere formality. It wasn’t to be though. Wonder what soft corner the Indian skipper MS Dhoni and the selectors have for Ishant that they keep retaining him even though the bowler is providing every reason for him to be ousted?

Enough has been discussed about Ishant’s recent ODI numbers. They can be termed as atrocious without even having to take a second glance. At the same time, it must also be remembered that Ishant’s Test numbers aren’t that flattering either. In 51 Tests, he has managed only 144 wickets at a staggeringly high average of 38 with three five-wicket hauls and one ten-wicket haul. You wouldn’t call him a strike bowler, would you? Till a couple of seasons back, there was a theory floating around that Ishant has been plain unlucky to have not picked up more wickets. But, that phase has long passed.

Further proof of Ishant’s decline is in his recent performances, Between January 2012 and March 2013 (the last time Ishant played in a Test), Ishant has featured in 9 Test matches, and has managed only 14 wickets at a batsman-ish average of 57. Six of these games have been played at home, in which he has grabbed only 11 wickets at an average of 39.50. The three other matches were played in Australia in which he totalled merely 3 wickets while average 120. Forget a five-for, he hasn’t picked up more than three wickets in an innings during this poor phase. What then justifies his selection?

On the contrary, although Zaheer has lost much of his bite and his career is on its last legs, he did impress to an extent in the Ranji games he has played. That he won’t be at his best is a given. But, he has done well enough to merit another international recall. India might get away with a poor bowling attack against a weak West Indies side. But remember, they would be heading to South Africa next. And, on paper, the current bowling attack looks brittle. The selectors missed a great chance to find out if Zaheer can fit into the scheme of things for the South African tour.