After incredible win, Jason Holder says he always had faith in team

West Indies captain Jason Holder stated that he always had faith in the team after his side pulled off an incredible five-wicket win over England in the second Test at Headingley.

West Indies captain Jason Holder stated that he always had faith in the team after his side pulled off an incredible five-wicket win over England in the second Test at Headingley.

West Indies chased down 322 with Shai Hope starring with 118 not out. He had scored a hundred in the first innings as well. The victory was a massive surprise considering the manner in which the Windies performed over the last few years, and more specifically in the first Test.

“It feels really good, especially after the game in Edgbaston, it was a tough loss,” Holder was quoted as saying in an AFP report. 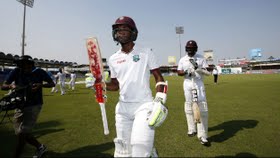 “A lot of teams would have crumbled coming back into the second Test match and probably would not have given England the fight that we gave them,” he added.

“I said at the beginning of this Test match that I back these guys to rebound and there was no better way to do it,” the skipper further said.

“It was mainly about winning the game, especially after the loss at Edgbaston. Knowing how much the fellas really wanted this win, you could see the fight and belief in the dressing room on the faces of the guys,” said Hope about his incredible innings.

The West Indies will now head to Lord’s next week’s for the third Test with the series squared 1-1.