Dhoni needs to score from ball one: Sehwag

Former India skipper MS Dhoni continues to be the matter of debate in the run-up to the final T20 at Thiruvananthapuram, after he struggled to score quickly at Rajkot.

Another former India captain Virender Sehwag feels that the Indian team management needs to define his role in the T20 format. 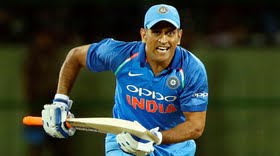 “Dhoni should realise his role in the team. He has to change the momentum early while chasing a strong total. He has to score from ball one and the team management should make him understand this point,” Sehwag told ‘India TV’.

While Dhoni had a strike rate of 132 in the previous match, he failed to rotate the strike. “Team India needs MS Dhoni at the moment, even in T20 cricket. He will step down at the right time. He will never block the way for any young cricketer,” Sehwag further told India TV.