Mohammad Amir returns to Lord’s: Who is saying what?

With Mohammad Amir returning to the venue where he disgraced himself six years ago, he has become the centre of attraction in the cricket world. Here’s what players, present and ex, are saying about the lad who went astray, but has been given an opportunity to redeem himself

With Mohammad Amir returning to the venue where he disgraced himself six years ago, he has become the centre of attraction in the cricket world. Here’s what players, present and ex, are saying about the lad who went astray, but has been given an opportunity to redeem himself. 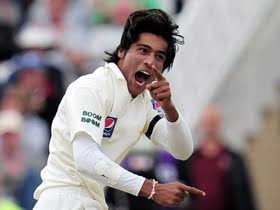 Sachin Tendulkar: I think the guys who decided to penalise him have already penalised him. He’s served his sentence and now he’s back to playing after whatever he was asked to do, so I think it’s fine. I’ve seen a couple of interviews. One with Michael Atherton, I saw that interview and he came across as a mature guy with balance and that is something that will reflect on the field I think. It’s all about how you think, how you plan, and then you execute those plans on the field.

Wahab Riaz: Everybody is supportive of Mohammad Amir; no one is reluctant. We all take him as our young brother and he is a part of our family. If you make a mistake it doesn’t mean that you are out of this world and people will keep blaming you for that. Once he has done his punishment, then it is a new life for him and he is ready to have a go again. What has happened has gone now, so I think the best thing is that he can perform well and I want him to take five wickets in this Test match to get his name back and to get his image back which has been spoiled. I wish him all the best to win this Test for Pakistan.

Joe Root: The decision has been made to let him play so it would be silly to go any further with it. It is a great opportunity to face him and I am looking forward to that challenge.

Mike Brearley: I think that like King Lear he was more sinned against than sinning, although he was sinning. He did wrong and was very foolish. He was misled by senior players.

Ramiz Raja: Have always felt Pakistan had a bad history of fixing and we haven’t learned. It’s an emotional subject. There was concern about his comeback among the Pakistan players, they felt cheated. They have calmed down and are trying to get along.

Darren Gough: I would play him – I have my own personal reasons for saying it. Since he’s come back, he’s been a model professional. I think he’s a brilliant bowler, a brilliant athlete and he’s great to watch. I think he was a very immature young man, influenced by two senior players, one being the captain of Pakistan.

Kevin Pietersen: If you cheat the system either by taking drugs or money to under-perform then you are mugging the spectators, your teammates and a sport that has been around a lot longer than you.

Graeme Swann: This is a man who crushed the morality of the game. And yet he is being allowed back to play at the Home of Cricket. Amir should have been banned for life for his part in the corruption scandal of 2010, If you want to protect the integrity of the game, help cricket grow and inspire youngsters, there can be no place for corrupt players. You must have proper deterrents.

And finally, the current Pakistan skipper Misbah-Ul-Haq: Everyone has their opinion but now he is back everyone is supporting him and the whole team is there. Honestly speaking I don't care about these things. I'm just focused on what is going on in the middle. I have to focus on that and how he bowls and how he performs. He has the best chance to prove himself in the middle, not to worry about spectators saying something, never listen to them and focus on what is going on.