The Bengaluru Test may have finished a week back, but the dust is yet to settle on the DRS controversy that erupted during the match. While India and Australia have stated they want to move on, the issue keeps coming up time and again.

The Bengaluru Test may have finished a week back, but the dust is yet to settle on the DRS controversy that erupted during the match. While India and Australia have stated they want to move on, the issue keeps coming up time and again.

Speaking to the press ahead of the Ranchi Test, Aussie skipper Steven Smith termed Indian captain Virat Kohli's comments that he had observed a couple of other instances of Aussie players seeking help from the dressing room over DRS as disappointing.

"It was a little bit disappointing. I think that obviously I made a mistake and I came out and said that. What I did was wrong and I know that. 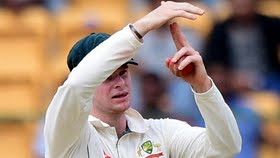 "But that was the first time it has happened. I know as a team we don't do that. And I think his comments... I think he said that we did it twice while he was out there. I don't think he was out there long enough for two appeals. He's entitled to his opinion, but from my point of view he's completely wrong," Smith claimed.

Kohli however stuck to his guns, saying he had no regrets. "I think about what I say. I don't regret anything that I've said, but at the same time it's very important not to be stupid and go on with the same things on a daily basis because there's cricket to be played. There was a decent break in between, and we certainly don't' want to sit and think about one issue all the time.

"We have two Test matches to play and that's what we need to focus on. And I think it was a mature decision on everyone's part to move on from that. We've seen instances in the past stretch too long and it just causes disharmony and there's no outcome," the Indian skipper commented.

Smith, on the other hand, said he would try to seek clarification from Kohli on his comments when the two captains meet match referee, Richie Richardson, before play on the first day in Ranchi.

"Perhaps, might be able to ask a few questions. We'll see what the mood's like at the time. Virat obviously stuck by his comments. From my point of view I think they're completely wrong. I came out after the game and said I made a mistake. It was an error on my behalf, I had a brain fade. In regards to saying that we do it consistently, that's complete rubbish in my opinion. I think he was wrong in his statement," the Aussie skipper maintained.