How many times has MS Dhoni done it? On numerous occasions that India have looked down and out, the Indian skipper has pulled off miraculous victories for India.

How many times has MS Dhoni done it? On numerous occasions that India have looked down and out, the Indian skipper has pulled off miraculous victories for India. He did it under extreme pressure, in the 2011 World Cup final, in a league game against Australia during the tri-series last year when all seemed lost and on countless other occasions. Thursday was another occasionwhen it seemed India were destined to lose. The feeling was, for sure this time Dhoni cannot pull it off for India. Remember, this time he was injured as well, and could barely run at full stretch. But, Dhoni is Dhoni!

When Dhoni came into bat in the final, India were in a comfortable position, but he soon saw things slipping away. In no time India were on the back foot and Lanka had taken over as a favourites. But even a half-fit Dhoni was enough to shell-shock the Lankans, who have been at the receiving end of Dhoni’s miracles on many occasions in the past. In spite of the number of times the Indian skipper has pulled India out of precarious situations, it never ceases to amaze how he remains extremely calm under pressure. 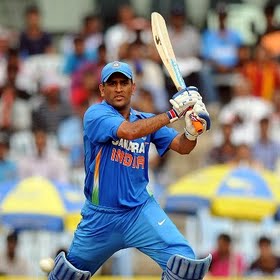 Overall, both teams played equally well and were neck to neck for most part of the clash. But, it was Dhoni’s which stood out as the difference in the low scoring game. The innings only reiterated Dhoni’s greatness as a one-day great in the modern era. Most other batsmen would have panicked to take the game into the last over, with only one wicket left. However, this is where Dhoni is different. He has supreme confidence in his own ability to score as many as possible off the last over. This wasn’t the first time he pulled it off, and wouldn’t be the last time either.

If you take out Dhoni’s performance, India’s batting was pretty pedestrian. Mind you, this wasn’t the easiest pitch to bat on, which makes the Indian skipper’s effort even more praiseworthy. Of all the other batsmen, Rohit Sharma batted particularly well, and set up the chase for India early on. For once, you cannot blame him for throwing his wicket. It was the pitch and some incisive bowling from Rangana Herath that got him. Dinesh Karthik and Suresh Raina batted well briefly, but did not have the talent to survive for long on the surface.

India’s bowling was more penetrative on the helpful pitch. Bhuvneshwar Kumar showed again what a big difference he makes to the side, sending back the dangerous Lankan openers. Ravindra Jadeja and Ravichandran Ashwin then combined magnificently to lead a middle and lower collapse. Their efforts were even more impressive considering Kumar Sangakkara and Lahiru Thirimanne had taken Lanka to a highly comfortable position leading into the slog overs. However, both fell at the wrong time for Lanka, and India seized the initiative. The Lankans themselves fought back admirably and, at one stage, looked set to lay their hands on the trophy. Alas, they beat India, but not Dhoni.