Thisara Perera played a blinder of a knock scoring an unbeaten 69 from just 44 balls with 3 fours and 5 sixes to help Sri Lanka to a five-wicket win in the Fourth ODI at Kimberley! Apart from Perera, Sri Lanka got to the 300-mark run chase thanks to half centuries from Skipper Tillakaratne Dilshan (87) and Dinesh Chandimal (59).

The Sri Lankan run chase saw an early wicket going down when Upul Tharang was caught behind off Lonwabo Tsotsobe in the 4th over itself. Skipper Tillakaratne Dilshan and Kumar Sangakkara pounded the South African bowlers after that to provide the impetus for the visitors. The pair put up 83 runs for the 2nd wicket which was broken through an outstanding jumping catch from Alviro Petersen at the deep mid wicket boundary to foil Kumar Sangakkara’s attempt to go for a six against Robin Peterson. Sangakkara fell for 32 from 31 balls with 2 fours and a six in the 17th over. 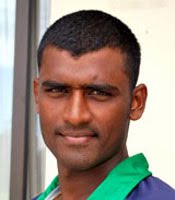 Dinesh Chandimal, the next man in provided solid support to Dilshan as the third wicket pair added 68 runs. Dilshan (87 from 87 balls with 9 fours and 2 sixes) departed in the 29th over got brilliantly caught by the diving JP Duminy in an expansive drive off Tsotsobe. The match looked to have slipped away from Lanka at this stage but Dinesh Chandimal was batting freely to keep his team in the hunt. In the 35th over, he was joined by the left handed Thisara Perera which changed the game completely as Sri Lanka smashed 48 runs in the mandatory powerplay block between the 36th and the 40th over.

South Africa seemed to have got back in the game when a well set Dinesh Chandimal (59 from 81 balls with a four and a six) was bowled by a full length slower one from Tsotsobe which brushed the pad and ricocheted onto the stumps. Chandimal left with SL at 246 for 5 in 41 overs. Angelo Mathews joined his fellow all-rounder Thisara Perera and made sure that the wickets weren’t going down. While Mathews helped himself to an unbeaten 21 from 25 balls, Perera stole the game away with his blinder of 69* from just 44 balls with 3 fours and 5 sixes. It was Thisara Perera’s maiden ODI fifty which got him the Man of the Match. For the Proteas, Lonwabo Tsotsobe was the most successful bowler taking 3 for 51.

South Africa have been restricted to 299 for 7 in the Fourth ODI at Kimberley. The Proteas lost their way once the key wickets of Duminy, AB de Villiers and Faf du Plessis went down in quick succession. Towards the end, South Africa with a crucial partnership between Wayne Parnell (21) and Robin Peterson (23*) helped them to 299.

The Proteas who were cruising along nicely got pegged back in the last 10-15 overs. Their downslide started with JP Duminy (36 from 47 balls) getting caught behind looking to steer Perera to thirdman in the 39th over. Skipper AB de Villiers missed out on a century, falling for 96 (from 76 balls with 8 fours and 3 sixes) when he walked across his stumps in a flick shot but only to get bowled round his legs by a slower one from Perera. Faf du Plessis, the last specialist batsman got out edging a turning delivery from Herath to the keeper. The left arm spinner Rangana Herath had a good day taking 2 for 45 in 9 overs.

Second Drinks Break: South Africa have cruised along to 206 for 3 in 32 overs at the time of the second drinks break. While the hosts are making good progress, the weather seems to be threatening with rain likely to pour down any moment.

Skipper AB de Villiers who hit his 28th ODI fifty taking only 31 balls has moved onto 74 (from 53 balls with 7 fours and 3 sixes). JP Duminy is giving him company on 20* from 27 balls. The Proteas lost two quick wickets that of Graeme Smith (68 from 69 balls with 7 fours and a six) and Colin Ingram (1) between the 24th and the 25th overs.

First Drinks Break: South Africa are well placed at 97 for 1 in 16 overs at the first drinks break. Former Skipper Graeme Smith has got his 45th ODI fifty taking only 45 balls. He is unbeaten on 54 from 48 balls with 6 fours in the company of Skipper AB de Villiers who is on 5* from 9 balls. The only casualty so far has been Alviro Petersen (37 from 39 balls with 4 fours and a six) who was nicely caught by a diving Upul Tharanga at widish long on after going for a big shot off Rangana Herath in the 14th over.

Toss and Teams :South Africa have won the toss and are batting first in the Fourth ODI at the De Beers Diamond Oval in Kimberley. Sri Lanka are going into this match without Mahela Jayawardene who misses out with an injury. Fast bowler Dhammika Prasad is also out with an injury while Kosala Kulasekara has been dropped. The three new players coming into the Sri Lankan line-up are Lahiru Thirmanne, Thisara Perera and debutant off spinner Sachithra Senanayake.

The Proteas have made two changes with Dale Steyn and Albie Morkel getting a break. In their place come Wayne Parnell and Vernon Philander.