India crushed England by 7 wickets in the third ODI at Ranchi to take a series lead of 2-1. It was the bowlers who set up an easy win for India with England getting bundled out for just 155 on a decent batting strip. Virat Kohli regained his form with a stroke-filled 77* to wrap up the run chase in just 28.1 overs.

India crushed England by 7 wickets in the third ODI at Ranchi to take a series lead of 2-1. It was the bowlers who set up an easy win for India with England getting bundled out for just 155 on a decent batting strip. Virat Kohli regained his form with a stroke-filled 77* to wrap up the run chase in just 28.1 overs.

It was a disastrous batting show from England after they were put into bat first. A tight opening spell from Bhuvneshwar Kumar and Shami Ahmed gave nothing away to the visitors. Alastair Cook looking to improvise things fell across for an lbw to Shami Ahmed with England 24 for 1 in 8 overs. England went on the backfoot at 68 for 3 when Kevin Pietersen (wrongly given caught behind off Ishant Sharma’s delivery which squared him up and brushed the outside of the hip) and Ian Bell (25, caught behind in a cut shot off Bhuvneshwar) were dismissed in the space of two overs.

India tightened the noose completely thanks to its spinners who reduced the visitors to 98 for 6 in 25 overs. Firstly, Morgan got caught at point top edging a reverse sweep off R Ashwin followed up by two arm balls from Jadeja which bowled Kieswetter and got Samit Patel lbw. The visitors recovered after the triple blow thanks to Joe Root (39 from 57 balls) and Tim Bresnan (25) though India came back with timely wickets. Root was caught behind by the diving MS Dhoni off Ishant Sharma followed up by a classical off break from Ashwin that went through the gate of Bresnan. Jadeja wrapped up the English innings taking 3 for 19. It was an all-round bowling show from the Indians which was backed up by some exciting fielding. 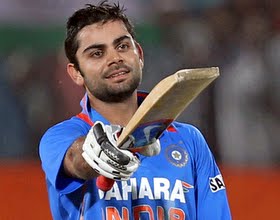 The run chase wasn’t going to be too tough for the hosts on a batting track and with the dew expected to set it. There was an early casualty though when Rahane got bowled through the gate by Finn. Gambhir (33 from 53 balls) and Kohli sealed the run chase after that by taking India to 78 for 2 before the former was caught slogging Tredwell to mid on. After Gambhir’s exit, India accelerated to victory in no time thanks to an entertaining partnership of 66 in just 48 between Kohli and Yuvraj (who scored a 21-ball 30 before he was bowled playing along the wrong line to Tredwell). Yuvraj’s exit was a blessing in disguise for the 40,000 spectators as they got to watch their hometown boy MS Dhoni bat in the middle, though it was a small innings of 10*. Virat Kohli was the stand out performer with the bat by regaining his form with a majestic knock of 77* from 79 balls with 9 fours and 2 sixes. He was also the Man of the Match ahead of the bowling heroes from India.

Toss and Teams: India have won the toss and asked England to bat first in the 3rd ODI at the brand new Jharkhand State Cricket Association Stadium in MS Dhoni’s hometown Ranchi. The reason for Dhoni to bowl first is because he expects a lot of dew in the evening. Team India has retained the same XI that had defeated the visitors in the Kochi ODI. England have made just the one change with Tim Bresnan returning back in the place of Chris Woakes. The pitch at this ground in Ranchi is expected to be full of runs.