England in the driver's seat in Lord's Test after Aussie collapse

England is very much in the driver’s seat in the Lord’s Test after just two days of cricket. The hosts may be three down for 31 in their second innings but they are already ahead by 264 runs on a pitch that is extremely dry because of the hot weather.

England is very much in the driver’s seat in the Lord’s Test after just two days of cricket. The hosts may be three down for 31 in their second innings but they are already ahead by 264 runs on a pitch that is extremely dry because of the hot weather. Australia batted themselves out of the contest in this Second Ashes Test by folding out to a paltry first innings total of 128! England had the option of enforcing the follow on but decided to bat again so that its bowlers get some rest and hoping that the dry pitch breaks up further. 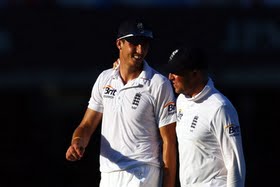 After Tea, Anderson had Siddle (2) nicking his outswinger to second slip and Swann had Haddin (7) caught at slip top edging a slog sweep. The Australian innings was wrapped up with no.11 Ryan Harris miscuing a big hit off Swann to mid on. The 34-year-old Swann finished with a 16th five-wicket haul with bowling figures of 21.3-5-44-5.

England batting again lost three wickets to Peter Siddle before the close of Day 2. Alastair Cook (8) was first to go in the 11th over, bowled off an inside edge trying to play a forcing backfoot drive against the slope. Jonathan Trott was bowled as well, off a bottom edge in a frontfoot defence while Kevin Pietersen sliced a rash square drive to point.

Update at Tea on Day 2: Australia is staring at a follow on after dramatically slipping to 96 for 7 at Tea! The tourists lost half a dozen wickets in less than 30 overs in the afternoon session. The first to depart post lunch was Chris Rogers who was wrongly given out lbw in the 16th over. The left hander couldn’t show enough courage to take the review – one of which was wasted by Watson just before the lunch break. It was a lousy full toss from Swann which Rogers (15) was looking to heave, but ended up getting hit on the waist with the ball dipping down. Umpire Erasmus was foxed to give an lbw despite the ball easily sailing over the top of leg.

Australia lost Phil Hughes (1) next with the left hander playing a rash drive on the up off Bresnan to be caught behind. Hughes took a review against the caught behind but lost it because of a faint noise. Usman Khawaja (14) who was put down at slip by Trott off Swann perished to the same bowler after miscuing a needless big hit. Swann followed that up with a ball that turned and bounced to have Steven Smith (2) gloving him to shortleg. Seven balls after that Skipper Michael Clarke (28 from 41 balls) tried to flick an inswinging yorker from Broad to be dismissed lbw.At the stroke of Tea, Ashton Agar ran himself out at the bowling end.

Watson smoothly stroked away to 30 from 42 balls with half a dozen boundaries before attempting a flick shot right across the line. Bresnan struck the pad with a lovely inswinger and Watson did more damage to the Aussies by wasting a review.

The morning session began with a wicket and ended with a wicket. The very first ball of the day’s play saw Tim Bresnan nick behind an away going delivery from Ryan Harris. The same bowler had night watchman James Anderson caught behind to have England at 313 for 9. The last wicket pair of Stuart Broad and Graeme Swann batted easily on what was a slow track to take the hosts past 350.

Australia eventually got their last wicket in the 101st over with Stuart Broad caught behind on the backfoot off James Pattinson. Broad scored 33 from 29 balls while Graeme Swann remained unbeaten on 28 from 26 balls. Ryan Harris captured his 3rd five-wicket haul playing in his 13th Test match.