Australia are on the driving seat after Day 2 of the second Ashes Test at Lord's as they reduced England to 85-4 at stumps after declaring at 566-8.

Australia are on the driving seat after Day 2 of the second Ashes Test at Lord's as they reduced England to 85-4 at stumps after declaring at 566-8. Australia leads by 481 runs while England need another 281 to avoid the follow-on with six wickets in hand.

Australia declared at 566-8 in their first inning, batting for more than five sessions, but England had done only little things wrong. Stuart Broad (4-83) bowled magnificently well on a pitch which had nothing for the faster bowlers. Broad bowled probing line once he realized that the ball in doing nothing after landing on the pitch. Australian bowlers had nothing to do in the first five sessions and they watched and learned about the surface. They took four wickets in just one session to give their team the best chance to bounce back in the series. 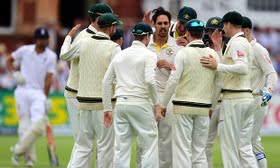 The Australian Vice-Captain carrying on from his overnight score of 128* scored his first double century and led Australia to virtually unbeatable score. After failing twice in the first test, Smith had done his home works. England tried to bowl him on the sixth stumps where Smith tends to poke that, but he was up to the mark in this inning.

Earlier in the day, Chris Rogers could only add 15 runs to his overnight score of 158* and was bowled by a beauty from Stuart Broad. Michael Clarke played a pull shot straight into the hands of Ballance at square leg. Wickets kept falling from the other end, but it didn’t make any impact on Smith as he was scoring freely. Voges (25) poked a ball outside off-stump off Broad where wicketkeeper Butler took the easy catch. Replacing Shane Watson in this match, Mitchell Marsh was bowled by Broad for 12. Debutant Peter Nevill played a good hand of 45 and added 91 runs for the sixth wicket with Smith.

England had a nightmare start when wicketkeeper Peter Nevill caught Adam Lyth off Mitchell Starc on the second ball of the inning for a duck. Cook and Ballance were looking good, but Mitchell Johnson had some other intentions. He bowled Ballance in the 9th over and this was the moment were little collapse began. Hazlewood bowled Ian Bell in the next over and Johnson got rid of in-form and most dangerous Joe Root in his next over. Good thing for England is that their skipper Alastair Cook is still there on the crease. Cook and Stokes safely negotiated the rest of day’s play. In between, Stokes played few delightful strokes too.

The first target for England on day 3 will be to reach 366 to deny follow-on.