Former India skipper Sourav Ganguly, who not someone known to mince words, has spoken to the media about the ongoing India-England series.

Former India skipper Sourav Ganguly, who not someone known to mince words, has spoken to the media about the ongoing India-England series. Here are some of the interesting observations he made.

On wickets for India-England series: Speaking to cricinfo, Ganguly said, “I think the wickets are going to be good. And India should be playing on good pitches. I firmly believe they will continue to be unbeatable at home. But if you want to be a good bowling unit overseas, where your spinners come into play and win you Test matches, Ashwin and Jadeja will have to learn bowling on good first-day, second-day pitches, where there is no turn, where you have got to bowl the right line and right length. And on day four, day five, the game will change very quickly in these conditions.”

On Ashwin's brilliant run: Ganguly told cricinfo, "If you look at his record in the first 12-13 Test matches in the subcontinent, he has got 100 wickets. There is always a question mark on how he bowled in England and Australia and South Africa. And there's definitely an improvement on that. He has definitely got better in those conditions.He has continued to thrive on these turning pitches. I don't think it is that difficult bowling on these turning pitches. You see Jadeja, his record home and away is like chalk and cheese. Ashwin will be very, very dangerous in this squad. Jadeja as well. Pitches turning. Fast. Hitting the rough and turning it away. He will be very, very hard to get away. So England will have to bat very well in the first innings."

On Harbhajan's pitch jibe: "He has got to take it easy, I think, Bhajji," Ganguly told cricinfo. "He has been a champion for India. He has just got to move ahead. I know some of the pitches are square turners. That's not Ashwin's fault, though. He has probably got those pitches to bowl on, and he has bowled on them. I think Harbhajan is a great bowler, a great servant for Indian cricket, and he should enjoy the cricket and leave it at that. I know some of the pitches - against South Africa he would probably have got 40 wickets in that series - but even if he didn't get those pitches in his career it doesn't make him a lesser bowler than anybody." 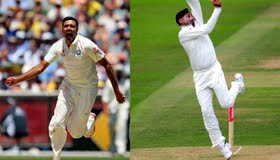 In praise of Virat: "Virat is a leader. He'll be a good leader. He gets runs himself, is passionate, wants to create a team that will win in overseas conditions. I get the right vibes when I hear him speak. He is very honest; honest with his selections, honest with his players. That's more important in a leader. You get respect by doing that," Ganguly told Sportstar.

Pietersen's absence a major factor: "England will miss Kevin Pietersen. The knock that he played in Mumbai in 2012, turned the series for them. When I say about Pietersen, what I mean is a player of that quality... just does not mean Pietersen but that quality at No.4. Pietersen will not play forever, everyone has to go at some stage but it is the class and quality in that middle order which is lacking. You need people to score runs at a good pace to set up Test matches. There is talent in this England batting line-up, may not be the flair but I firmly believe that England will depend on Cook, Joe Root and Ben Stokes and Jos Buttler, who will be the man to watch for England," he told India Today.