Tribute: Virender Sehwag-- The man who made Test cricket exhilarating

Exciting, exhilarating, enchanting -- these are words you do not usually associate with Test cricket. But, bring Virender Sehwag into the equation, and the five-day game gets redefined. A couple of years before Sehwag made his mark at the international stage, Adam Gilchrist had already made his name as a dashing Test cricketer.

Exciting, exhilarating, enchanting -- these are words you do not usually associate with Test cricket. But, bring Virender Sehwag into the equation, and the five-day game gets redefined. A couple of years before Sehwag made his mark at the international stage, Adam Gilchrist had already made his name as a dashing Test cricketer. But, what Sehwag did at the top of the order may remain unparalleled. After all, he was the pioneer of attacking Test openers, the kind world cricket may never see again. His may have run out of favour with selectors in recent years, but his contribution to Indian cricket has been immense.

The biggest irony of Sehwag has been that he became a great Test player, and was average in ODIs, which many cricket pundits believed was supposed to be the other way round. And, the critics could not be faulted. After all, here was a batsman who believed bowlers only existed so that they be hit out of the park by batsmen. Here was a batsman who had scant respect for the age-old, tried and tested theory of seeing off the new ball in the five-day game. For him, it was only about, 'see ball, hit ball', as he once famously said. And yet he succeeded against the best, which is what made Sehwag so special.

The standout aspect of Sehwag's batting was undoubtedly his hand eye co-ordination. As famously known to all, Sehwag hardly moved his foot. Yet, on more occasions that not he was able to get to the pitch of the ball. Sehwag threw the copybook out of the window. And yet, he succeeded. He enthralled. He exhilarated. Sehwag proved how overrated technique can be. He was a maverick in every sense, who developed a style of his own, and stuck to it. Sometimes he did not succeed, but more often than not he did. And so often, that he would go down in history as one of India's biggest match-winners in the Test format. 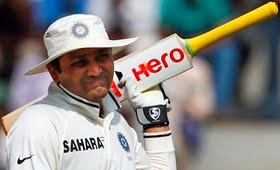 Although Sehwag made batting look easy, it still cannot be concluded that he took his batting lightly. His record proves he definitely did not. The Delhi dasher scored runs all over the world, against the best of attacks -- from Bloemfontein to Bangalore and Melbourne to Mumbai. And, he got big runs, more than once batting out an entire day. Sehwag's batting may often seem like a walk in the park to an observer. But, you don't score two triple hundreds, a 293 and more such mammoth scores doing timepass. Sehwag must be given due credit for applying himself, and playing the big knocks on numerous occasions when the team needed them.

The last couple of years that Sehwag represented India in international cricket were not so fruitful. He struggled in England and Australia, and the poor form spilled on in home games as well. His deteriorating eyesight did not help, and even the move to play with glasses on did not change his fortunes. To put it in clichéd terms, Sehwag was a shadow of his original self towards the end. In hindsight, Sehwag should have retired much earlier. But then, few cricketers get their signing off timing right. Cricket will do well to remember Sehwag as the man who revolutionised the role of the Test opener -- one who was a pure entertainer for fans, cricket experts and perhaps even the opposition.