South African skipper Graeme Smith played a brilliant captain’s knock to register the fifth double hundred of his Test career in his 112th match, against Pakistan.

South African skipper Graeme Smith played a brilliant captain’s knock to register the fifth double hundred of his Test career in his 112th match, against Pakistan. The innings put the Proteas in an impregnable position as they look to square the second Test at Abu Dhabi having lost the first inside four days. With a lead of over 360, South Africa will have to do something miraculously badly to lose the Test from here. As the Proteas look to overcome Pakistan, we look back at left-hander Smith’s earlier four double hundreds in his career. 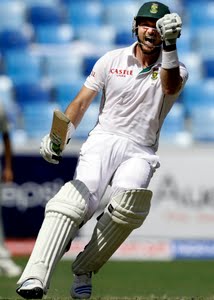 200 vs Bangladesh at East London in October 2002: In his very third Test, Smith registered his maiden double hundred. He made 200 against Bangladesh off 287 balls with the aid of 25 boundaries, having batted for 338 minutes. South Africa batted first in the match, and amassed 529 for 4. Gary Kirsten got 150 in the innings. In reply, Bangladesh were bowled out for 170 and then 252, following on. Makhaya Ntini and David Terbrugge both picked up seven wickets in the match. Smith was adjudged man of the match for his double century.

277 vs England at Edgbaston in July 2003: These were still early days in Smith’s career, and he was even elevated to captaincy following Shaun Pollock’s failure as leader. South Africa batted first and Smith blasted 277 from 373 balls. His innings lasted for over 540 minutes during which he smashed 35 fours. Herschelle Gibbs also made 179 as the pair added 338 for the opening wicket. South Africa declared on 594 for 5 in their first innings. In reply, Michael Vaughan’s 156 ensured that England replied strongly. The hosts were all out for 408, after which the game meandered towards a draw. Smith made 85 in his second essay.

259 vs England at Lord’s in August 2003: In the very next match of the series, the South African captain came up with his third double hundred. England batted first this time and were rolled up for 173. Smith then compiled a magnificent 259. He batted for 370 balls and close to 570 minutes during his marathon knock. The innings featured as many as 34 boundaries. Gary Kirsten also came up with a century in the innings, as South Africa replied with a massive 682 for 6 decl. The Proteas went on to clinch the match by an innings and 92 runs.

232 vs Bangladesh at Chittagong in March 2008: Smith’s fourth double hundred came five years back against the minnows. South Africa batted first and Smith notched up 232 from 277 balls with 33 fours and one six as well. During the innings, Smith featured in a record opening stand of 415 with Neil McKenzie, who made 226 from 388 balls with 28 fours and three sixes. South Africa declared on 583 for 7. Bangladesh faltered in reply and the visitors went on to win the Test without much trouble, by an innings and 205 runs.