It is a time of festivities in Jamaica. The nation is in a good mood. Celebrations marking the 50th anniversary of the island’s independence from England are underway. This weekend, Jamaican athletes are expected to burn up the track at the London Olympics and send the country in a frenzy of merriment.

It is a time of festivities in Jamaica. The nation is in a good mood. Celebrations marking the 50th anniversary of the island’s independence from England are underway. This weekend, Jamaican athletes are expected to burn up the track at the London Olympics and send the country in a frenzy of merriment. And today, hometown favourite Marlon Samuels poured gasoline on the fire by crafting a superlative century against New Zealand at Sabina Park.

Yet, despite the Jamaican’s wonderful innings, they gave up a 51-run lead to the visitors, whose four-man pace attack worked diligently all day to tighten the screws and maintain a firm hold on a batting unit that overpowered them in the first test. Part time spinner Narsingh Deonarine snared two wickets--including the very important one of Martin Guptill--late in the evening to give the West Indies hope of finding their way back, but New Zealand is still ahead by 110 runs with eight wickets still intact. 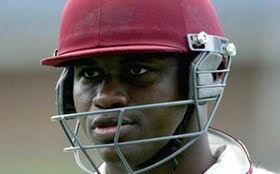 The only batsman to really break free of the reins that the tourists imposed on them was Samuels. Sammy came in and entertained, but his 32, the second highest score of the innings behind Samuels’ 123, lasted only 29 deliveries and was much too brief.

The Jamaican right-hander joined the fray at 17/2, after Trent Boult removed Powell and Fudadin. Swinging the new ball beautifully away from the openers,the left-handed pacer got Powell out caught at slip pushing at a good length delivery, while Fudadin was palpably LBW to a straight one that he probably expected to move away, though it required a review to secure the verdict.

Samuels had to overcome a few difficulties during the first part of his innings. He was not always in total control but was regularly able to unsheathe the attractive stroke. He made good use of the vacant third man area, often piercing the gap between slip and gully and he played an on-drive off Tim Southee that showed his form and class.

He lost Gayle seven overs before lunch. The left-hander suffered as miserable a time at the crease as a batsman could while scoring only eight. The torture lasted 55 deliveries. During this time, the powerful Jamaican, probably too intent on not disappointing his home fans, could hardly put a foot right. He played and missed, miscued, edged, and was dropped by Ross Taylor off Southee when five. It was clear he was not at his best and so noone was shocked when Wagner surprised him with bounce to get him caught at point.

The Jamaican spectators would have been hoping for something special from the world’s most destructive batsman, but the sublime display from Samuels would have provided much satisfaction, especially to the purists. While everything crumbled around him, the West Indian batting stylist was steadfast.

Chanderpaul came and memories were cast back to the recent England series when both batsmen constructed a few face-saving partnerships for the West Indies. The Guyanese showed signs he was booking in too, but after batting 56 minutes for 9 he edged a good delivery from Southee and was caught by Taylor.

Samuels, in the meantime, was as tranquil and as charming as ever. The more wickets fell around him the more he seemed to accelerate. So effortless and elegant was his stroke-play that at times it seemed like he was a magician, waving a wand to will the ball from his presence.

But when it seemed that his teammates would leave him stranded in the nineties, he exchanged the wand for a battering ram and bludgeoned four sixes to move from 98 to 123 in breathtaking fashion sending the crowd to their vuvuzelas. It was an awesome innings that will be remembered for a long time.

Yet he was only able to guide his team to 209. His 49-run partnership with Sammy was the best of the innings, disappointing many who expected the West Indies to set up another victory by dominating the New Zealand bowling on the second day.

In December last year, New Zealand defeated Australia at Hobart after a Vettori injury that prompted them to play four seamers. The tourists will be hoping that injury to the same player will be another blessing in disguise. All four pace bowlers contributed in achieving their 51-run lead and with a few deliveries already seeming to keep low, the lead might prove decisive in the fourth innings.

At stumps the New Zealanders had scored 59 from the 28 overs they faced. Guptill was again impressive, scoring 42 laced with some very pleasant drives before both he and Watling fell LBW to Deonarine in the final minutes.