The New Zealand tour was significant for ageing warhorse Zaheer Khan since it was to determine whether he is still good enough to last another season or so.

The New Zealand tour was significant for ageing warhorse Zaheer Khan since it was to determine whether he is still good enough to last another season or so. Unfortunately we haven’t got a proper answer as yet. In both South Africa as well as the recently concluded series in New Zealand, Zaheer was good in phases without being exceptional. He got a few wickets at Johannesburg and again at Wellington, but never threatened to run through the opponents. In the other Tests, he was at best average. 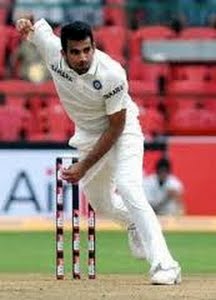 Per se, Zaheer’s performance has been good enough for him to retain his spot in the Indian team for the England tour. However, there are other factors that the man himself as well as the selectors need to consider before putting him on that plane to England. Remember, unlike the tours of South Africa and New Zealand, the Indian touring party will feature in five Tests in England. Also, there won’t be much of a gap between Tests considering India’s tight international schedule. First and foremost thus he must be sure of his fitness -- that he can handle the workload of the strenuous tour.

If one goes back to the disastrous 2011 series, Zaheer limped off hardly half an hour into the first Test, and was not seen for the rest of the series. His career has constantly been on the downslide since. Even if he believes that he can last five Tests, his effectiveness and consistency remains a question mark. There have been times when he has looked potent, but these have been only in phases. One of the key reasons for the same is the fact that he has lost a lot of pace with age. A fast bowler becomes less effective when he loses speed, and the case has been the same with Zaheer.

Without doubt, the left-arm seamer has been the country’s best fast bowler since Kapil Dev, even better that Javagal Srinath. But that is the past. India need to look ahead now. The worry though is that the team is yet to find a suitable replacement for Zaheer. Ishant Sharma has been groomed since 2007, but at times he still bowls as if he is the junior-most bowler in the side. He was the most successful bowler in New Zealand, but failed when it mattered the most.

Speaking of the other pacers, all are raw, and hence India cannot depend on them as yet. Mohammed Shami found the going tough in New Zealand. The likes of Bhuvneshwar Kumar, Umesh Yadav and Varun Aaron are yet to establish themselves. So Zaheer still has a role to play in the side, as a mentor. But, the question remains. Should India risk taking him to England or alternatively hope the younger bowlers stand up and deliver?