With Sachin Tendulkar deciding to hang up his boots, we bring you a compilation of some interesting facts and numbers from the master blaster’s career.

With Sachin Tendulkar deciding to hang up his boots, we bring you a compilation of some interesting facts and numbers from the master blaster’s career. 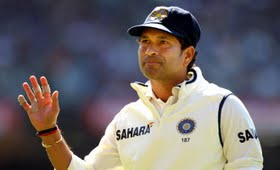 While Tendulkar holds most record in international cricket, he has never held the record for the highest individual score in Test cricket. In fact, he has never scored a triple century unlike some of his contemporaries like Brian Lara, Matthew Hayden, Inzamam-Ul-Haq and even Virender Sehwag.

For a brief while, Tendulkar held the record for the highest individual score in ODIs when he blasted 200 against South Africa at Gwalior, the first double centurion in ODIs. The record was broken by Sehwag, who made 219 against West Indies at Indore.

Tendulkar featured in plenty of IPL matches, but represented India in only one T20, against South Africa at Johannesburg in 2006, scoring just 10 runs in the match.

A number big Indian players made their debut after Tendulkar but retired before him. The list includes Rahul Dravid, Sourav Ganguly and VVS Laxman, all of whom made their Test debuts in 1996 and retired in recent years. Anil Kumble made his debut in 1990 and hung up his boots in 2008. Javagal Srinath represented India from 1991 to 2003 and Venkatesh Prasad from 1994 to 2001.

Apart from his batting exploits, Tendulkar has also picked up 154 one-day wickets, making him the 11th

He has in fact two five-wicket hauls in one-dayers, both of them taken at Kochi – one against Australia and the other against Pakistan.

Tendulkar has smashed 20 hundreds against his favourite team, Australia, in Tests and ODIs combined.

The master blaster had a prolific 1998 scoring 12 international centuries. Tendulkar scored fifty or more in 10 consecutive Tests during the period December 2009 to October 2010.

Tendulkar has been dismissed as many as 28 times in nineties during his two- decade long international career.

Tendulkar has never scored a Test hundred at Lord’s. Also, Zimbabwe is the only Test playing nation where he hasn’t scored a Test ton. ;highest Indian wicket-taker in one-dayers.

Of his 51 Test centuries, 22 have come in India, six Australia, five each South Africa, Sri Lanka and Bangladesh and four in England.

While Tendulkar scored a duck on his one-day debut against Pakistan in 1989, he ended up with a half-century in his final ODI game, against the same opponent last year in the Asia Cup.