Pakistan clinch Super Over after sensational tie in Second T20I

After a sensational tie, the winner of the contest in the 2nd T20I was decided through the Super Over. Pakistan defeated Australia in the Super Over through an exciting last ball finish chasing down the target of 12 from 6 balls.

Australia Innings Update: The second T20I ended in a thrilling tie at the Dubai International Stadium infront of a packed house. Needing 7 runs to win from 2 balls, Australia seemed to be done and dusted thanks to an excellent final over from Abdul Razzaq. However, young Pat Cummins launched a missile over wide long on for a six to break the hearts of several Pakistani fans. With just 1 run needed from the final ball, Cummins was caught heaving a full toss off a leading edge at mid off! 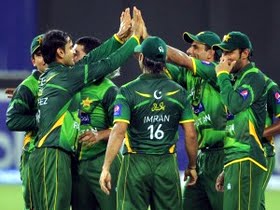 Pakistan steadily got back into the game taking key wickets to reduce Australia to 117 for 5 in the 17th over. Just when Pakistan was seeming to be in control of the game, Australia Skipper George Bailey hit a couple of massive sixes to keep the match in a balance. Bailey got the equation down to 10 from the final over but got out in the first ball pulling Abdul Razzaq into the outfield after a 27-ball 42 (with 4 fours and 2 sixes). Saeed Ajmal got the Man of the Match award for his superb figures of 4-0-20-2 with half of those runs coming in his last over.

Pakistan Innings Update: Pakistan posted a hugely competitive total of 151 for 4 in the second T20I at Dubai. Considering that the pitch is on the slower side and Pakistan having a quality spin attack, it would be a tough task for the Aussies to chase those runs. Of course, they are in a must win situation to save the 3-match series.

Batting first after winning the toss, Pakistan got a lovely stand of 75 for the 2nd wicket between Skipper Mohammad Hafeez (45 from 42 balls with 6 fours) and Nasir Jamshed (45 from 36 balls with 4 fours and a six) that laid the foundation. A busy knock of 43* (from 26 balls with 6 fours) from Wicket Keeper Kamran Akmal gave the finishing to the Pakistanis towards a total of 150+.

For the Aussies, Mitchell Starc was outstanding with figures of 4-0-17-1 which included an early wicket of Imran Nazir.