Sammy heroics pulls off terrific chase for Windies over Aus

West Indies pulled off a terrific run chase at Dhaka to down the Aussies in a last over finish. Skipper Darren Sammy led the Windies from the front by smashing two consecutive sixes off James Faulkner to wrap up the proceedings.

West Indies pulled off a terrific run chase at Dhaka to down the Aussies in a last over finish. Skipper Darren Sammy led the Windies from the front by smashing two consecutive sixes off James Faulkner to wrap up the proceedings.

While the West Indies stay alive in the tournament, Australia with two defeats now would struggle to make it to the semis.

Australia batting first seemed to be a in a great hurry. As a result they lost key wickets much before their innings got into the slog phase. By the 6th over, they lost Finch, Warner and Watson. Glenn Maxwell who was striking the ball brilliantly played too many shots to depart in the 12th over leaving Australia at 100 for 5. Maxwell struck 5 fours and 3 sixes in his 22-ball 45.

West Indies kept on taking wickets to keep the Aussies down to 178 for 8. Sunil Narine was outstanding for his 2 for 19 in 4 overs which included a maiden. 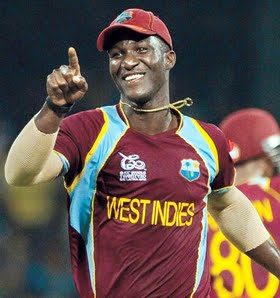 The West Indian run chase was led by Chris Gayle who wasted no time in taking the Aussie bowlers to the cleaners. Gayle scored 53 from 35 balls with 6 fours and 2 sixes before he got out slogging young leggie James Muirhead early in the 13th over.

West Indies were well set at 101 for 2 when Gayle got out but soon the equation threatened to go out of their reach. Fortunately with Dwayne Bravo and Darren Sammy around, Windies got to the target with two balls to spare. Bravo contributed 27* from 12 balls with 2 fours and 2 sixes while Sammy produced a blinder of 34* from 13 balls with 2 fours and 3 sixes.

Toss and Teams: Australia have won the toss and opted to bat first against West Indies in the Group 2 match at the Shere Bangla National Stadium in Mirpur. The Aussies have made two changes with James Faulkner and leg spinner James Muirhead coming in for Nathan Coulter-Nile and Brad Hogg. West Indies have made no changes.