Pakistan batted 1.2 overs after Tea and declared adding just the one run! The visitors left Sri Lanka with an improbable target of 261 in 37 overs. Tillakaratne Dilshan batted in his usual manner, stroking the ball positively. After batting out for 12 overs, Dilshan (28 from 33 balls with 2 fours and a six) lost his wicket when he went back to a full length arm ball from Abdur Rehman to get trapped lbw.

Sri Lanka went onto lose another wicket in the form of a nervous Tharanga Paranavitana (32 from 72 balls with 5 fours) didn’t read a doosra from Saeed Ajmal and got hit on the pad playing well outside the line for an lbw. The hosts lost two wickets in 22 overs but that wasn’t encouraging enough for Pakistan to go for the kill. The two Skippers decided for the stalemate ahead of the last hour. Kumar Sangakkara remained unbeaten on 24 (from 22 balls) along with Mahela Jayawardene, who avoided a pair. Surprisingly, the Man of the Match award was given to Junaid Khan ahead of the centurions from both the sides.

Tea on Day 5: Pakistan are looking to declare their second innings and ask Sri Lanka to chase a target in the final session. The visitors quickly scored 99 for 2 in 16.4 overs before Tea to stretch their overall lead to 260 runs. 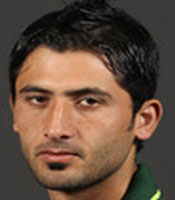 The session started with Pakistan triggering a collapse in the Sri Lankan lower half with Junaid Khan picking up a five-wicket haul and Abdur Rehman finishing with four wickets. First to go in the session was Angelo Mathews (47 from 101 balls with 4 fours and a six) when he edged a good length outswinger from Junaid Khan to the keeper. Mathews had put up a crucial stand of 92 with Sangakkara to save the follow on.

Kumar Sangakkara was next to go as he came down the track and dragged his hoick off Abdur Rehman to squareleg to miss out on a double century for the second consecutive time in this series! Sangakkara settled for 192 which came in 351 balls with 15 fours and a six. Junaid Khan removed Nuwan Kulasekara with a yorker and Abdur Rehman got the wickets of Prasanna Jayawardene (6) and last man Nuwan Pradeep to wrap up the Lankan first innings. Sri Lanka were bowled out for 391 in 124.4 overs.

Pakistan showed some urgency when they came out in their second innings. Mohammad Hafeez (21 from 25 balls) and Abdur Rehman (36 from 22 balls with 3 fours and 3 sixes) became causalities as Pakistan went on the attack. Taufeeq Umar remained unbeaten on 41 to take Pakistan to 99 for 2 in 16.4 overs at Tea.

Lunch on Day 5: The SSC Test match is certainly heading towards a draw as Sri Lanka have avoided the follow on. The follow on target was seen through by overnight centurion Kumar Sangakkara and Angelo Mathews. Pakistan went wicketless in the crucial morning session while Sri Lanka collected 86 runs to reach 367 for 5.

Build Up to Day 5: Well we are into the fifth and final day of the Second Test at the SSC Ground in Colombo. Realistically speaking the match is headed for a draw as we are yet to see the completion of the first innings of Sri Lanka. However, the hosts are under a bit of pressure following yesterday’s mini collapse in the final session.

The Lankans still need another 74 runs to save the follow on and make Pakistan bat again which would then ensure a draw for them. The hosts are left with five wickets and despite the collapse yesterday with a well set Sangakkara at the crease and with Mathews, Prasanna Jayawardene to come, Sri Lanka in most probability should save the follow on.

Pakistan would need as many as 15 wickets to take in quick time and that too only if they can enforce a follow on by bowling out Sri Lanka under 352.