India captain Virat Kohli heaped praise on the team for an excellent all-round performance against West Indies on Friday. Set 252

“I think it was a clinical performance again. Early on there was quite a bit of moisture, it was a good toss to win, and they bowled really well. It was a good batting effort to get us to 250,” Kohli said in the post-match presentation.

Shikhar Dhawan and Virat Kohli were dismissed early after which Ajinkya Rahane and Yuvraj Singh built a steadying partnership. Rahane and MS Dhoni then continued the good work before the latter in the company of Kedar Jadhav. 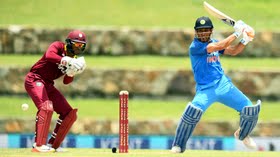 Rovman Powell and Jason Mohammed looked good for West Indies, but they were never in the chase. “The wicket played much better in the second innings. The bowlers created pressure and got breakthroughs at the right moments,” said Kohli.

Kuldeep Yadav and Ravichandran Ashwin got three wickets while Hardik Pandya claimed two. “It’s about putting your hand up at the right time, its about how many people can stand up and put in those performances,” Kohli added.

“We’ll surely look into [making changes]. We have quite a few players who haven’t had a game in a while,” admitted the skipper.