Rising Pune Supergiant pacer Jaydev Unadkat has done well for the team, with 22 wickets in 11 games, and has been one of the key reasons for RPS reaching the final

Rising Pune Supergiant pacer Jaydev Unadkat has done well for the team, with 22 wickets in 11 games, and has been one of the key reasons for RPS reaching the final.

“In the last couple of years, I didn’t get much of a support from the past captains despite having a fruitful domestic season,” Unadkat admitted in an interview with The Hindu.

“Probably that hunger to do well was the difference from the past couple of seasons. Skill-wise, I have always got it in me. It’s just about capitalising on it. The first match was important this season and once I did well, I just built on that,” he went on to add. 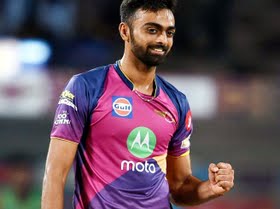 Unadkat even as a hat-trick in the last over of the innings against Sunrisers Hyderabad. In the match against MI, Smith gave him the ball with 17 required to win, and he delivered under pressure. Unadkat said skipper Smith’s backing helped him.

“When I bowled the last over to Rohit (MI captain Rohit Sharma), we had planned to bowl slower ones from outside the crease. He hit me for a six. That was the moment Smithy came to me and told me, I’d back you all the way. If you want to bowl the same ball, go for it”. That’s something which motivates the bowler,” Unadkat said.

Then, against Sunrisers, MS Dhoni gave him confidence. “Mahibhai, when I took those (five) wickets against Sunrisers, in between I went for a boundary. He came up to me and said “you should have not allowed the pressure to be released and you’re good enough to bowl against these kind of batsmen”. Those points at times help you execute the plans in the middle," Unadkat explained.

Unadkat made his Test debut in December 2010 in South Africa. But, he never played another Test for India.