With only two win in seven games, Royal Challengers Bangalore are in do-or-die situation in literally every game. But they started off very poorly in the field which definitely would have hurt someone like Virat Kohli who takes so much pride in his team’s performance

With only two win in seven games, Royal Challengers Bangalore are in do-or-die situation in literally every game. But they started off very poorly in the field which definitely would have hurt someone like Virat Kohli who takes so much pride in his team’s performance. So, he made sure that his team would not replicate in the batting what they have done in fielding. To make this sure, he scored an unbeaten century and guided his team to seven-wicket victory with three balls to spare after Rising Pune Supergaints score 191 in their 20 over.

Chasing a mammoth score of 192, Kohli and his opening partner KL Rahul started the inning bit cautiously. The pair scored just 10 runs in first three over. But some loose over in between gave the hosts the momentum they needed. Royal Challengers Captain who had already one century in this IPL, looked in superb form and pierced the gap in covers so often. But with the range of shots he has in the leg side, he always targeted the leg-side when he intently looked to cut-loose. The Indian Test Skipper also used the long handle of the bat with good effect and smashed seven big sixes. More than this he also brought up his century in 58-balls by hitting RP Singh for consecutive sixes in the penultimate over of the chase. These couple of sixes turned the pendulum of the match towards RCB for forever which was moving either way until then. Rising Pune Supergaints bowlers didn’t pose any kind of threat to the openers which meant they scored freely without taking too much risk. Bangalore raced away to 94 without loss in 11 overs. Adam Zampa, playing his first IPL game, turned out to be go-to-bowler for Dhoni. He made double strike when he dismissed both Rahul and the big fish AB de Villers in the same over. When Pune just seemed to be getting some momentum in their defend, new batsman Shane Watson butchered five fours to Thisara Perera in one over which brought back Bangalore back after losing two quick wickets. Watson was trapped leg before wicket by RP Singh in 16th over but not before a match winning cameo of 36-runs off 12 deliveries. After dismissal of Watson, Dhoni introduced Ashwin for the first time on attack and he bowled his only over for 7. With 40 needed off 3 over, Adam Zampa was brought back onto the attack but Kohli took him apart and accumulated 18 runs off his last over. Kohli done bulk of the scoring in the end over and took the game away from Dhoni in the 19th over and it was just a formality going into the last over where Bangalore needed just four runs. The unbeaten inning of 108-runs came off just 58-balls which included seven sixes and eight beautiful boundaries. 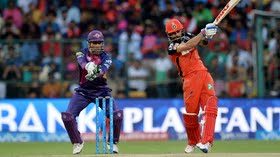 Earlier in the day, Kohli won the toss and elected to bowl first. It was again the Rahane-show for Pune. He scored his sixth half-century of the season and propelled Pune to 191 in 20 overs with his 48-balls 74-runs. Rahane and Khawaja started the inning in flash but both batsmen were caught at the same end after a mix-up which caused Khawaja’s dismissal and Saurabh Tiwary’s entry in the middle. Tiwary was little nervous in start of his inning and was dropped twice in the sixth over. First, Stuart Binny put down a sitter at cover then Sachin Baby who is preferred over Sarfaraz Khan for his fielding ability dropped him at point. And to make his more worse, Rahane slammed Aaron for six over point on the last ball of his over to end the powerplay on 60 for 1. Aaron was unlucky again when Rahane’s miss flick landed between bowler and Watson. Then a ball later, ball came out of Parvez Rasool hand’s to go onto the fence. Kohli was livid when Rahul missed an easy stumping of Saurabh Tiwary on 25 off Chahal in the very next over. Both Rahane and Tiaway scored half-century off 34 and 37 balls respectively. Finally, Tiwary was stumped by Rahul off Chahal in 15th over. This wicket brought Dhoni on the crease and the Bangalore crowd welcomed their national team limited over captain with a huge cheer. But Dhoni departed in the next over off Watson after hitting him a six. Pune lost a bit of momentum in the slog over which has been their case throughout this season. They lost five wickets and scored just 45 runs between 14th to 19th over. But Rajat Bhatia and R Ashwin strike few blow in the last over and scored 16 runs off it to finish 191 for 6.