Kohli: Our spinners got a bit of turn, but South African batsmen took their chances

Weather and some poor bowling combined as India lost the fourth India against South Africa at Johannesburg by five wickets to stay in the series despite Shikhar Dhawan’s ton earlier in the day.

India were going well with the bat when lightning came down and halted the match. “After the first lightning break when Shikhar and Jinks (Rahane) came off, the guys felt that the wicket got faster and the weather got cooler and they felt that the ball wasn't coming on nicely. The ball was getting a little wet, our spinners got a bit of turn but the South African batsmen took their chances and they came off,” the Indian skipper said post the loss. 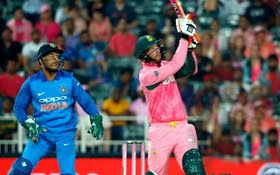 Kohli, however, admitted that South Africa adapted to the conditions and the shortening of the game. “They improvised well and they deserved to win. The game getting shorter worked in their favour; had it been a full game you never know. It was more like a T20 game and you have to go after the bowlers. If a side has momentum in their favour, it is very difficult to stop them. Especially guys like Miller and their keeper batted brilliantly as well. When AB got out we felt we were in the game but these two took it away from us.”

On the no ball incident, Kohli said that his team will have to avoid such flaws. “No balls are something that hurts you as a team and it is something we hope to rectify and not repeat them in the next games. They are a quality side and we know that. We also know that we have to be at the top of our game to get a win and that's what we'll do for the next game,” he stated.