Steve Waugh had termed Australia’s tour of India in 2001 as the ‘final frontier’. Cricket pundits felt this was their best chance of winning in India; they had arrived in India on a 15-match winning streak. As things transpired, Australia failed to clinch the series in spite of some inspirational performances, and an unprecedented fightback from India.

Steve Waugh had termed Australia’s tour of India in 2001 as the ‘final frontier’. Cricket pundits felt this was their best chance of winning in India; they had arrived in India on a 15-match winning streak. As things transpired, Australia failed to clinch the series in spite of some inspirational performances, and an unprecedented fightback from India. Still, what a memorable series it turned out to be! Neither side actually deserved to lose the series, but the Indians had enough in the tank during the closing moments to clinch the deal.

Australia continued their brilliant run in Tests, overcoming the Indians by 10 wickets at the Wankhede Stadium inside three days and, in the process, making a perfect start to the series. The Aussies won the toss and chose to field first. It was a decision that was perfectly justified by their bowlers, who rolled over the Indians for a mere 176 on the opening day, Sachin Tendulkar contributing 76 of them. For the Aussies, Shane Warne and Glenn McGrath grabbed four and three wickets respectively.

Chasing India’s mediocre total, Australia themselves were in trouble, losing half their side for 99. Thereafter, Matthew Hayden and Adam Gilchrist featured in a match-defining partnership. Both registered contrasting tons – Hayden scoring 119 off 172 balls and Gilchrist slamming 122 from only 112 balls, as the Aussies recovered to 349 all out. India failed with the bat a second time as well, getting bowled for 219 – Tendulkar again top-scoring with 65. Australia chased down the 47 needed to win without losing any wickets. 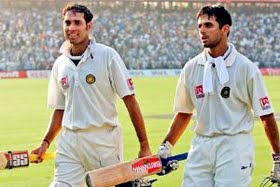 The Aussies were confident following their supreme effort at Mumbai, and it showed in their first innings at Eden Gardens as well. They notched up 445 in spite of a hat-trick by Harbhajan Singh, courtesy a resolute ton by Steve Waugh. In reply, India completed their hat-trick of failures with the bat. VVS Laxman was the only one to show some pluck as India were undone for 171. Not surprisingly, Waugh asked the Indians to follow on, a decision that backfired in the manner Australia wouldn’t have thought of in their wildest of dreams.

The Indian think tank made an inspired move, sending in Laxman at number three. The in-form batsman played the innings of his life and looked like not getting out at all. He forged that memorable alliance with Rahul Dravid, who roared back to form with a century of his own. The Laxman-Dravid batted out one whole day, and changed the complexion of the game altogether. By the time, Laxman was dismissed for 281, the tide had turned. An inspired India, led by Harbhajan, galloped to a 171-run win.

3rd Test at Chennai: A humdinger of a decider

The closest clash of the series was rightfully reserved for the final Test at Chepauk. Australia batted first and in spite of Hayden’s double hundred were bowled out for under 400, Harbhajan claiming seven scalps. India replied very well, making 501 courtesy Tendulkar’s hundred and three fifties by the other batsmen. Harbhajan once again troubled the Aussies in the second innings, his eight-for restricting them to 264. Mark Waugh’s half-century and forties from Steve Waugh and Michael Slater were the only scores of note.

Having run India so close, Australia were not going to die wondering. Chasing 155, India were cruising at 76 for 1 before they crumbled inexplicably. Sameer Dighe’s unbeaten 22 helped India sneak through while man of the series Harbhajan hit the winning runs as India won by two wickets to clinch the series.