The ongoing Australia tour is one of the worst phases of Indian cricket in the recent times. The Border-Gavaskar Trophy has already been surrendered 0-3 to the Aussies with still one Test left at the Adelaide Oval. Amongst all the horrors that the fancied Team India has faced in this series, there is a silver lining in the form of Umesh Yadav - who could go onto become the next great bowler for his country! Umesh Yadav’s impressive performances so far has been the only consolation for India in this tour.

Coming from a weak first class team Vidarbha, Umesh Yadav has made it big at the international level rattling the stumps of quite a few batsmen ever since making his Test debut against the West Indies at home. Prior to that West Indies series, there was lots of hype surrounding around Varun Aaron who had clocked the fastest delivery ever by an Indian in one of the domestic matches. Both Varun Aaron and Umesh Yadav got into the Indian team, but it was the latter who stole the limelight by bowling slightly quicker and taking a good amount of wickets. Varun Aaron also injured himself at the wrong moment to miss out on the Australian tour where Umesh Yadav is making the batsmen hop around with his pace. 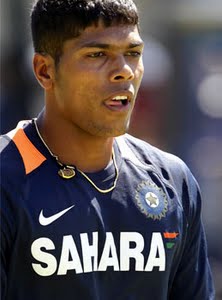 The 24-year-old Umesh Yadav had made his way in the Indian team in the Twenty20 World Cup 2010 in West Indies in the place of an injured Praveen Kumar. He didn’t play a single game there but got his opportunity during the Zimbabwe tour in the Micromax Tri-Series where he didn’t make much impact. Following that stint with the Indian team in Zimbabwe, Umesh Yadav was thought to be a bowler having sharp speeds of around 140 kmph but wasn’t expected to be an intelligent operator who could make the ball talk which he has done against England, West Indies and now Australia! In Test matches, Umesh Yadav has really shown all his variations whether it is to swing the ball, seam it around or use the reverse swing.

Umesh Yadav has a very interesting background, its almost like a fairy-tale for this lad. His story could inspire a lot of budding cricketers to go onto play for the country. Umeshkumar Tilak Yadav is the full name of the latest match-winner produced by India in world cricket. Umesh Yadav’s father is an ordinary coal-mine worker in Nagpur. The Yadav family wasn’t in a position to afford money for his shoes, travel and other cricketing equipment and their youngest member in a family of five - Umesh against all such difficulties has gone onto become one of India’s fastest ever bowlers! All his financial woes vanished once he got bagged by the Delhi Daredevils in 2010. Umesh Yadav infact was at one stage of his life looking to get into the Police department but destiny had something bigger than that in store for him!

Few would believe that Umesh Yadav started professional training in cricket only at the age of 19! So in the last five years or so it has been rapid strides for this youngster towards the big league! Pritam Gandhe who not so long ago was playing for the Vidarbha Ranji team is ironically the Coach of Umesh Yadav! Now that Umesh Yadav has cemented his place in the Indian team, its all upto him to consistently deliver to follow the footsteps of Javagal Srinath and Zaheer Khan! Fitness will be the real key for Umesh Yadav’s success at the highest level, it could make or break his career if he shows any sorts of complacency in his work ethics. Otherwise, everything about Umesh Yadav looks so good to make him the next bowling great for India!

- A feature by BV Swagath