Mohammed Shami continued his great run with the ball, claiming 3 for 27 in 13 overs as India rolled over Bangladesh for 150 in 58.3 overs after the visitors

Mohammed Shami continued his great run with the ball, claiming 3 for 27 in 13 overs as India rolled over Bangladesh for 150 in 58.3 overs after the visitors decided to bat first. Mayank Agarwal (37) and Cheteshwar Pujara (43) then extended India’s ascendency as the hosts ended the day on 86 for 1.

Shami, who had picked up a hat-trick in the World Cup against Afghanistan, narrowly missed out on one at Indore on Thursday. Shami cleaned up the well-set Mushfiqur Rahim (43) with one that beat him for pace and then had Mehidy Hasan Miraz (0) lbw just before the tea break. However, Shami did not achieve the feat.

Speaking after the day’s play, Shami revealed what he has been doing right of late, which has brought him a lot of success. "I came to bowl one change, so I had to think of the conditions and situation. The thought process is to bowl lines that are as tight as possible. I've been using the width of the crease for the last two years,” the fast bowler said. 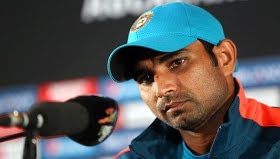 While Shami was outstanding yet again, it was a very good overall effort from Team India’s bowlers as Ishant Sharma, Ravichandran Ashwin, and Umesh Yadav also claimed two wickets each. Umesh it was who got the early breakthrough having Imrul Kayes caught by Ajinkya Rahane in the slips for 6. It was not a great day for Rahane in the field though as he dropped three catches -- Rahim twice and Mahmudullah once. Ashwin was the unlucky bowler on all three occasions. Indian skipper Virat Kohli also spilled a chance in the slips.

For Bangladesh, skipper Mominul Haque (37) and Rahim led the recovery with a fourth-wicket stand of 68 after the visitors crumbled to 31 for 3. Once Ashwin got past the defense of Haque through the innings fell apart.

India’s response began on a shaky note as Abu Jayed found the edge of Rohit Sharma for 6. Agarwal and Pujara, however, ensured India’s domination of Day 1 was complete.