Languishing towards the bottom of the points table, at number seven to be precise, Chennai Super Kings are fast running out of time to revive their IPL 2020 campaign. Set to face Sunrisers Hyderabad at Dubai on Tuesday, CSK only have two wins to their name in seven games and are in severe danger of not making it to the play-offs for the first time. The only time they did not make the play-offs were when they were suspended from the tournament.

Sunrisers Hyderabad themselves have only been slightly better than Chennai. In seven matches, they have registered three wins and four losses. SRH have been blowing hot and cold over the last couple of weeks. Their further progress in the tournament will depend on how consistent they are from hereon. With both CSK and SRH still struggling to figure out their best combination, the contest on Tuesday could end up being a rather close one.

Chennai were completely off-boil in the 37-run defeat to RCB in their previous encounter. They began well with the ball, restricting Bangalore to 93 for 4, but couldn’t finish things off as Virat Kohli went berserk. Deepak Chahar has been consistent for Chennai, picking up crucial wickets and keeping the runs down as well. However, the rest of the bowling order has not made much of an impact. Sam Curran and Dwayne Bravo will need to come up with better efforts while Shardul Thakur and Karn Sharma will hope they had just an off-day against RCB. 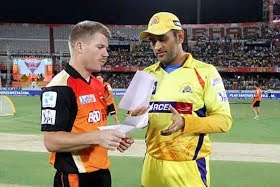 In the batting department, openers Faf du Plessis and Shane Watson have done the bulk of the scoring, but they cannot pull the team over the line every time. The middle-order needs to come to the party. Ambati Rayudu and Narayan Jagadeesan scored a few runs in the last game, but they were too slow to help CSK’s cause. There is a serious case for Ravindra Jadeja to be promoted up the order.

Sunrisers Hyderabad’s confidence would have been dented following the shock upset at the hands of Rajasthan Royals. SRH were in complete control in their defence of 159 before another Rahul Tewatia special and an amazing knock from Riyan Parag turned the tide. SRH have had decent success with the bat, but somehow most have failed to express themselves. While Jonny Bairstow has batted with flair, David Warner and Manish Pandey have been surprisingly restraint in their batting, and it has hurt them.

SRH’s bowling has been heavily dependent on leg-spinner Rashid Khan and yorker specialist T. Natarajan. Left-arm seamer Khaleel Ahmed did well in the last game, but Sandeep Sharma and Abhishek Sharma have been conceding too many easy runs.

Head-to-Head Record: Chennai have a significant edge over Hyderabad with nine wins and four losses in 13 games.

Chasing is difficult in Dubai, unless you have Rahul Tewatia in your team! Batsmen who get their eye in must carry on.

Temperature will be in the 30s when the game starts. It will get cooler as the match progresses.