Kevin Pietersen produced one of the best knocks in the history of Test Cricket as England finished the third day’s play at Headingley with a deficit of 68 runs with five wickets in hand.

Kevin Pietersen produced one of the best knocks in the history of Test Cricket as England finished the third day’s play at Headingley with a deficit of 68 runs with five wickets in hand. The good news for England is that Kevin Pietersen has managed to remain unbeaten on 149, which is his 21st Test century. The 32-year-old counter attacking knock came at a time when England had slipped to a shaky 173 for 4 in reply to South Africa’s 419.

England resuming the third day’s play on 48 for no loss were reduced to 173 for 4. By lunch, South Africa found their first breakthrough with Vernon Philander trapping Alastair Cook (24) lbw. It was a truncated morning session of 12.2 overs because of rain. Early in the post lunch session, Andrew Strauss (37) departed after getting caught behind off Dale Steyn. 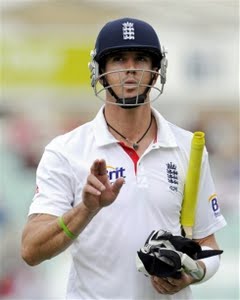 The hosts got through a partnership of 57 between Jonathan Trott and Kevin Pietersen. Just when England was back on the tracks, Trott (35) got out edging a cut shot off Steyn to slips. A few overs later, the Proteas were all over England when Ian Bell (11) edged his drive off a widish full ball from Jacques Kallis into the slip cordon.

With England in a shaky position of 173 for 4, debutant James Taylor joined Pietersen with the latter launching a blistering counter attack. Taylor held his ground for 104 balls scoring 34 before he was cleaned up by Morne Morkel. The 22-year-old James Taylor saw through the second new ball while helping Pietersen add 147 runs for the 5th wicket.

By the close of play, England got another fine partnership going with Wicket Keeper Matt Prior (20*) ensuring that there were no further inroads alongside Pietersen (149* from 212 balls with 22 fours and a six).