olkata Knight Riders will have a tough task on hand when they take on Sunrisers Hyderabad at home, in Eden Gardens, Kolkata on Sunday. They find themselves in a must-win situation against one of the strongest outfits in the competition this year.

Kolkata Knight Riders will have a tough task on hand when they take on Sunrisers Hyderabad at home, in Eden Gardens, Kolkata on Sunday. They find themselves in a must-win situation against one of the strongest outfits in the competition this year. Although Sunrisers went down in the last game, they will still want to go into the final four on a winning note, and thus will not be taking things lightly. Kolkata though have more than the opposition to deal with. There is a heavy forecast of rain for Sunday, and if that happens, it will put Kolkata's chances of making it to the final four in real jeopardy.

Kolkata should be disappointed with the position they find themselves in at present, but only have themselves to blame as they failed to build on the impressive start they had early in the tournament. They have been heavily dependent on opening Gautam Gambhir and Robin Uthappa to deliver. And, while both were in screeching form during the first half of the tournament, their consistency of late has been a bit disappointing. With a place in the final four on the line, the experienced duo will have to rise to the occasion. Manish Pandey is another batsman who will be expected to deliver.

The one big worry for the hosts is definitely the fitness of their in-form all-rounder Andre Russell. The West Indian missed the last game as well, and if he is unavailable for the do-or-die clash against Sunrisers, it will definitely be a big blow for KKR. Again, a lot will rest on the shoulders of Yusuf Pathan, whose monster-hitting skills have rescued the team on more than one occasion. Shakib Al Hasan is the other all-rounder who must stand up and deliver. In the bowling, Morne Morkel and Piyush Chawla have been top class, but Sunil Narine's lack of effectiveness should worry Gambhir.

In contrast, Sunrisers seem well placed and even a loss should see them through to the final four in all probability. But, they would not want to head into the knockouts with back-to-back defeats, having already lost to Delhi Daredevils in a close encounter in the previous game. Their batting, apart from David Warner, let them down in the previous game. But, Sunrisers should look at that as a one-off. In Shikhar Dhawan, Eoin Morgan and Yuvraj Singh, they have some quality batsmen who can change the complexion of the game. But, they would like Moises Henriques to stand up and deliver. 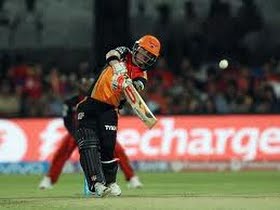 Sunrisers bowling could not defend a 150-plus score in the previous match, but that had more to do with the brilliance of Karun Nair than anything else. Like the batsmen, the bowlers must also look at it as a poor day at work. The bowlers should be confident, especially with not much pressure of victory on them. Mustafizur Rahman continues to be their standout bowler while Bhuvneshwar Kumar has also won them games. But, the loss of Ashish Nehra to injury definitely weakens the bowling. The rest will need to step up in his absence.